TEHRAN, November 14 - The US House of Representatives overwhelmingly passed a resolution clearly stating that US military assistance to Saudi Arabia in its war against neighboring Yemen is not authorized by Congress. 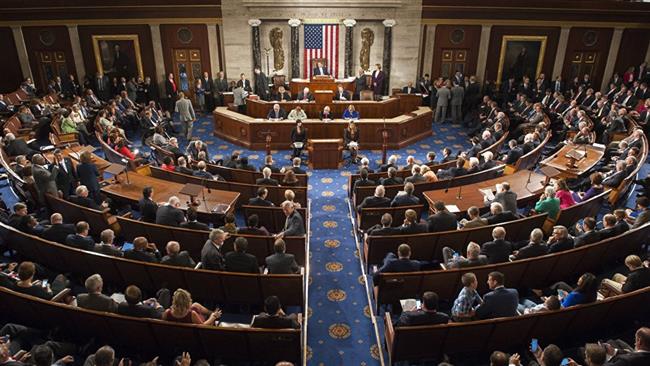 TEHRAN, Young Journalists Club (YJC) - In a rare exercise of its war-making role, the House of Representatives on Monday overwhelmingly passed a resolution explicitly stating that US military assistance to Saudi Arabia in its war in Yemen is not authorized under legislation passed by Congress to fight terrorism or invade Iraq.

The House adopted the nonbinding resolution by 366-30 vote on Monday. In a rare exercise, the House publicly acknowledged the Pentagon has been sharing targeting information and refueling warplanes that Saudi Arabia and its allies are using in its war of aggression against the impoverished nation.

The resolution states that US military operations are partly authorized to fight only al-Qaeda and other allied terrorist groups in Yemen, but not Houthi fighters.

"To date," the resolution says, "Congress has not enacted specific legislation authorizing the use of military force against parties participating in the Yemeni civil war that are not otherwise subject to" the 2001 Authorization for Use of Military Force or the 2003 AUMF in Iraq.

The House vote is being seen as a key victory for members of both Democratic and Republican Parties who believe only Congress has the power to authorize US military operations overseas.

The US government’s support for Saudi Arabia in its brutal war against Yemen is unconstitutional, House Representative Ro Khanna – a Democrat -- has said.

“What our military is not authorized to do is assist the Saudi Arabian regime in fighting the Houthis,” said Khanna, who co-sponsored the resolution with Representative Jim McGovern (D-Mass.), on the House floor. “In many cases, the Saudis have aligned with al-Qaeda to fight the Houthis undermining our very counterterrorism operations.”

“I’ve said for years we should sunset the 2001 AUMF,” added Representative Eliot Engel of New York, the top Democrat on the House Foreign Affairs Committee. “We never intended it to be a blank check.”

Khanna, a member of the House Armed Services Committee, has been urging Congress to exert more oversight of US military operations abroad. He argues that American involvement in the war in Yemen requires congressional authorization under the War Powers Act.

“I don’t believe our security cooperation with the Saudis triggers War Powers,” House Foreign Affairs Chairman Ed Royce (R-Calif.) said. “But just because it does not arise under that particular statute, does not make it immune from our scrutiny.”

Last month, Khanna and three other senators introduced a resolution under the War Powers Act, which gives Congress 15 days to vote on Washington’s involvement in the devastating war which has killed over 12,000 Yemeni civilians since it began in March 2015.

Approved in 1973, the War Powers Act is intended to check the president's power to commit America to armed conflicts without congressional consent.

While the US military started helping the Saudi-led conflict under command of then President Barack Obama, the cooperation grew dramatically larger under his successor, Donald Trump, who secured major arms deals with the oil-rich kingdom during a trip in May.