TEHRAN, November 15 - US military commanders could reject to follow a presidential order to carry out a nuclear first strike they view as illegal, a retired military general has told senators during a hearing. 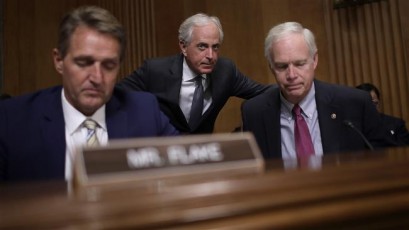 TEHRAN, Young Journalists Club (YJC) - US military commanders could reject to follow a presidential order to carry out a nuclear first strike they view as illegal, a retired military general has told senators during a hearing.

The US Senate Foreign Relations Committee hearing was held on Tuesday to examine President Donald Trump’s authority to launch a nuclear strike amid rising tensions between Trump and North Korean leader Kim Jong-un.

Congressional approval is required for the use of conventional military force, but the nuclear powers fall under the authority of the president. That has made some Democrats concerned.

Among the people who testified before the committee were former high-ranking Pentagon officials, who said that Trump, like previous presidents, has the authority to order a retaliatory nuclear strike, but not a pre-emptive nuclear attack.

Retired Air Force General Robert Kehler, commander of US Strategic Command under former President Barack Obama, said he would have refused to have carried out a nuclear first strike on presidential orders, if he believed it did not meet the requirements of proportionality and necessity under the law of armed conflict.

“I would have said, I’m not ready to proceed,” Kehler told the senators.

“Fortunately, these are all hypothetical scenarios. There is the human factor in our system. There is a human element to this."

The retired general and others testified that nuclear protocols ensure swift execution of a presidential order for a nuclear strike only in the event of a nuclear attack on the United States.

A pre-emptive military strike against North Korea or other countries would be “war in the constitutional sense that Congress should authorize," said former US Defense Department Undersecretary Brian McKeon.

Duke University's Peter Feaver, a political science professor, said that such an order by the president "requires personnel at all levels" to sign off on it.

Feaver added the secretary of defense, military leaders and lawyers would vet such an order. "The president cannot by himself push a button and cause missiles to fly," he noted.

Despite such assurances, Democrats have drafted legislation stipulating the president must obtain a declaration of war from Congress before ordering a nuclear first strike.

"The system as it is set up today provides the president with the sole and ultimate authority to use nuclear weapons," said Senator Ben Cardin of Maryland, ranking Democrat on the Senate committee.

"We are concerned that the president of the United States is so unstable, is so volatile ... that he might order a nuclear weapons strike," said Democratic Senator Chris Murphy of Connecticut.

Republicans warned against the message that restricting the president's ability to use nuclear weapons would send to the world about America's determination to respond to threats.

Senator Bob Corker, the committee's Republican chairman, acknowledged that many senators have raised questions about Trump’s authority to use nuclear weapons. However, Corker said the hearing was not intended to target Trump. “This is not specific to anybody,” he said.

“I do not see a legislative solution today, but that doesn’t mean that over the course of the next several months one might develop,” he told reporters after the hearing.

Tensions have been building up on the Korean Peninsula over Pyongyang's nuclear and missile tests. The North Korean leader ordered the production of more rocket warheads and engines in August shortly after the United States suggested that its threats of military action and sanctions were having an impact on Pyongyang’s behavior.