TEHRAN, November 17 -United Nations Secretary General Antonio Guterres has described Saudi Arabia’s long-running war on Yemen as “stupid,” saying the blockade on the impoverished country must come to an end. 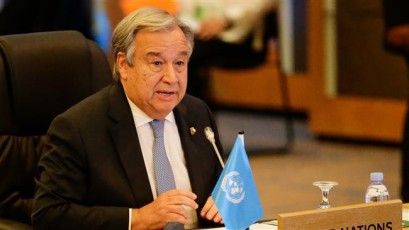 Speaking to reporters on Thursday, the UN chief’s spokesperson Stephane Dujarric said Guterres had written a letter to Saudi Arabia’s UN envoy Abdallah al-Mouallimi, asking the Riyadh regime and its allies to reopen Yemen's sea and airports as well as borders.

"The secretary general is very much disappointed that we have not seen a lifting of the blockade," said Dujarric, underscoring Guterres’ frustration with Saudi officials’ disregard for international calls to remove the siege.

Guterres and his top aid officials are "heartbroken at the scenes we are seeing from Yemen and the risk of continued suffering of the Yemeni people," Dujarric added.

"This is a man-made crisis," he said of the unprovoked military campaign that has killed over 12,000 Yemenis since it began in March 2015, noting that Guterres had called it a "stupid war."

Earlier this month, Saudi Arabia announced that it was shutting down Yemen’s air, sea, and land borders, after Yemeni fighters targeted an international airport near the Saudi capital.

This is while the UN has listed Yemen as the world's number one humanitarian crisis, where 17 million people are in dire need of food, seven million of whom are facing famine.

The war has also forced one of the world's worst outbreaks of cholera upon the impoverished country, killing over 2,200 people and leaving nearly one million people more infected.

In his letter to Mouallimi, Guterres called on the Saudi-coalition to allow UN flights to the Yemeni capital Sana’a as well as Aden, and to reopen the key ports of Hudaydah and Salif.

He also offered to send a UN team to Riyadh for talks on more thorough inspections at Hudaydah port, after Saudi Arabia claimed that ships docking there are used for smuggling arms into areas controlled by the Houthi Ansarullah movement.

Saudi Arabia began the war over two years ago in an attempt to reinstall Yemen’s former president Abd Rabbuh Mansur Hadi, a staunch ally of Riyadh, and crush the Houthi Ansarullah movement.

Since the onset of the brutal war, Ansarullah, the national army and popular groups have joined forces to defend the country against the Saudi aggression. Over the past two years, the Houthis have also been running the state affairs.