U.N. pleads for end of Yemen blockade or 'untold thousands' will die

TEHRAN, November 16 - The heads of three U.N. agencies issued a fresh plea on Thursday for the Saudi-led military coalition to lift its blockade on Yemen, warning that "untold thousands" would die. 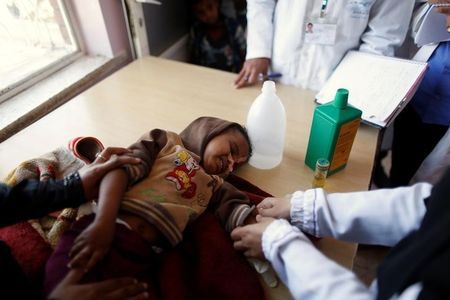 TEHRAN, Young Journalists Club (YJC) - The coalition closed all air, land and sea access to Yemen last week under the excuse of the interception of a missile fired toward the Saudi capital.

Yemen already has 7 million people on the brink of famine, but without the reopening of all ports that number could grow by 3.2 million, the statement said.

"The cost of this blockade is being measured in the number of lives that are lost," David Beasley, Antony Lake and Tedros Adhanom Ghebreyesus, the heads of the World Food Program, UNICEF and the World Health Organization, said in the statement.

"Together, we issue another urgent appeal for the coalition to permit entry of lifesaving supplies to Yemen in response to what is now the worst humanitarian crisis in the world."

For months, the U.N. has warned that the closure of Hodeidah would dramatically escalate the crisis.

"Without fuel, the vaccine cold chain, water supply systems and waste water treatment plants will stop functioning. And without food and safe water, the threat of famine grows by the day," the U.N. agency heads said in the statement.

At least one million children are at risk if a fast-spreading diphtheria outbreak is not stopped in its tracks, and there is also the risk of a renewed flare-up in cholera, which was on the wane after the most explosive outbreak ever recorded - with over 900,000 cases in the past six months.

"If any of us in our daily lives saw a child whose life was at immediate risk, would we not try to save her? In Yemen we are talking about hundreds of thousands of children, if not more," the joint statement said.