TEHRAN, November 13 -Thousands of Yemenis have taken to the streets of capital Sana’a to voice their outrage at the ongoing military coalition, led by Saudi Arabia, against their impoverished nation and a crippling blockade the invading alliance has imposed on Yemen’s ports, particularly the vital port of Hudaydah. 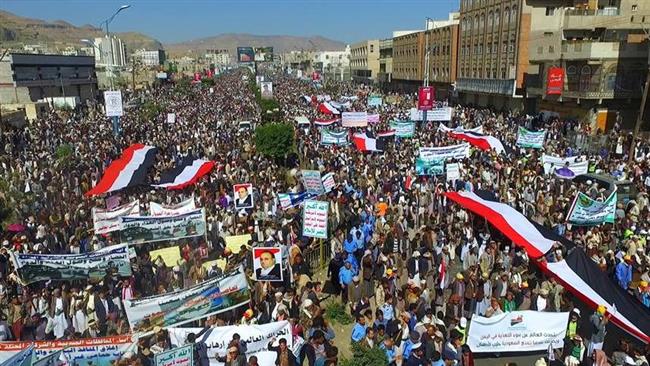 TEHRAN, Young Journalists Club (YJC) - Yemeni protesters marched in the Settin Street in the capital on Monday morning, shouting anti-Saudi slogans and demanding the immediate lifting of the persisting blockade from all Yemeni ports.

The demonstrators also chanted slogans such as “The famine and blockade are creations of the evil alliance” and “The blockade is unjust, the world is sleeping.”

The protesters, who also carried large Yemeni flags, finally convened in front of the United Nations office in Sana’a, calling on the world body to intervene and prevent the Saudi-led coalition from further bombing the crisis-hit nation.

Saleh al-Sammad, the president of Yemen’s Supreme Political Council of the popular Houthi Ansarullah movement, then addressed the protesters, saying Yemen’s launching a missile towards the Saudi capital was a natural stance his nation adopted to combat the Saudi war machine.

On November 4, the Saudi military announced that it had intercepted a missile launched by the Houthis over an airport near the Saudi capital, prompting Riyadh to close all land, air and sea ports in Yemen. The strike appeared to be the deepest yet within the Saudi territory.

Since March 2015, the Saudi regime has been heavily bombarding Yemen as part of a brutal campaign against its impoverished southern neighbor in an attempt to reinstall Yemen’s former President Abd Rabbuh Mansur Hadi, a staunch ally of Riyadh, and crush the Houthi movement, which is in control of large parts of Yemen, including the capital Sana'a. The Saudi campaign, however, has failed to achieve its goals.

Since the onset of the brutal war, Ansarullah, the national army and popular groups have joined forces to defend the country against the Saudi aggression. Over the past two years, the Houthis have also been running the state affairs.

Elsewhere in his remarks, Sammad added that after nearly three years of ceaseless airstrikes on Yemen by Saudi-led military alliance, the Yemeni nation has become resolute, more than ever, in defending their country against the invading forces.

He further noted that the only option before the Saudi leaders is to end the futile war and removing the blockade from the Yemeni ports.

Latest figures show that the war has so far killed over 12,000 Yemenis and wounded thousands more. The military campaign has also taken a heavy toll on the country's facilities and infrastructure, destroying many hospitals, schools, and factories.

Saudi Arabia has also imposed a total embargo on Yemen, causing severe food and medicine shortages and a cholera epidemic that has so far claimed the lives of nearly 2,200 people. After nearly three years of the imposed war, the impoverished nation has seven million people on the verge of famine and has had 900,000 suspected cholera cases in the past six months.