US threatens to shutter Palestinian office in Washington, DC

TEHRAN, November 18 -The government of US President Donald Trump has threatened to close down the Palestine Liberation Organization’s office in Washington, DC, if it supports a Palestinian bid to prosecute Israeli officials at the International Criminal Court (ICC). 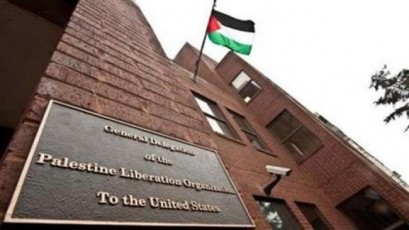 TEHRAN, Young Journalists Club (YJC) -The government of US President Donald Trump has threatened to close down the Palestine Liberation Organization’s office in Washington, DC, if it supports a Palestinian bid to prosecute Israeli officials at the International Criminal Court (ICC).

According to a law passed by the US Congress, Palestinians would be stripped of the right to have a mission in the US capital if they support an ICC investigation of Israelis for committing crimes against them.

Apparently, Secretary of State Rex Tillerson now thinks that Palestinian leaders have ran afoul of that law but it is up to Trump to make the decision, the Associated Press reported Friday, citing a State Department official.

This means Trump has 90 days to consider whether the Palestinians are in "direct and meaningful negotiations with Israel," the official said.  If Trump determines they are, the Palestinian office stays open.

The official claimed that even if the office closes, Washington would not cut off relations with the Palestinians and continue to work towards “a comprehensive peace agreement between the Israelis and the Palestinians.”

Trump has tasked his son-in-law, Jared Kushner, with brokering a peace deal between the two sides. However, the president’s unclear stance on the decades-long Israeli-Palestinian conflict has further pushed back expectations for an agreement.

The news came only two days after the US House Foreign Affairs Committee unanimously passed legislation that would cut funding to the Palestinian Authority.

The committee approved the bill known as the Taylor Force Act on Wednesday. It stipulates a cut in funding to the Palestinian Authority unless it discontinues paying stipends to the families of Palestinians killed by Israeli forces.

Another piece of legislation, known as the Hamas Human Shields Prevention Act, would slap sanctions on foreign governments, entities, and individuals for providing financial and material support to Palestinian resistance group Hamas.

The measures are set to be put to a vote at the full chamber of the House of Representatives.