Zarif in Turkey to exchange view with Lavrov, Cavusoglu on Syria

TEHRAN, November 19 -Iran’s Foreign Minister Mohammad Javad Zarif has traveled to Turkey to hold a trilateral meeting with his Russian and Turkish counterparts over the conflict in Syria. 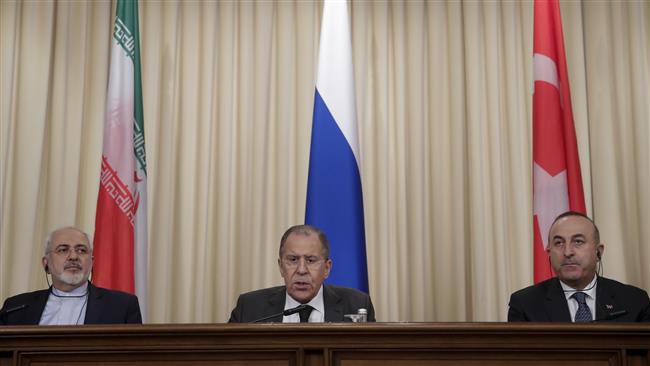 TEHRAN, Young Journalists Club (YJC) -Iran’s Foreign Minister Mohammad Javad Zarif has traveled to Turkey to hold a trilateral meeting with his Russian and Turkish counterparts over the conflict in Syria.

Zarif is due to sit down with Russian and Turkish Foreign Ministers Sergei Lavrov and Mevlut Cavusoglu in the southern Turkish resort city of Antalya on Sunday.

The summit comes in the run-up to another tripartite meeting on the Syria crisis between Iranian, Russian and Turkish Presidents Hassan Rouhani, Vladimir Putin and Recep Tayyip Erdogan in the Black Sea resort of Sochi on November 22.

Cavusoglu on Friday underlined the need for a “sustainable political resolution” in Syria in order to preserve the achievements of the Astana peace process in the Middle Eastern state.

“Firstly, we will evaluate what we have done so far, the point we have reached, and the steps that we can take from now on. How can we restore stability and peace in Syria? How can we integrate the Astana and [UN-backed] Geneva [processes]? We will continue our work intensively in the framework of the agreement of the leaders,” he said.