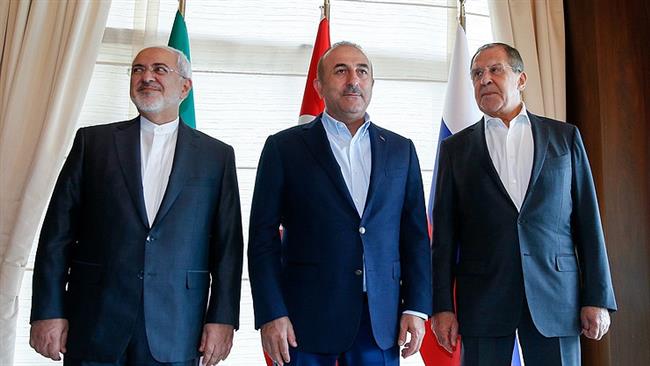 TEHRAN, Young Journalists Club (YJC) - “If they change their methods, they can also be involved in [promoting] regional peace instead of warmongering [policies],” Zarif said following a trilateral meeting in the southern Turkish city of Antalya on Sunday.

Zarif also took to Twitter on Sunday, lambasting Saudi Arabia, among other things, for fueling terrorism across region and committing human rights violations in Yemen.

He noted that while Saudi Arabia accused Iran of taking steps to stabilize the region, it was fueling terrorists while waging war in Yemen and fomenting crisis in Lebanon.

Working with Turkish & Russian counterparts to build on ceasefire we achieved in Syria & preparing for inclusive dialog among Syrians. Irony is KSA accuses Iran of destabilization, while itself fuels terrorists, wages war on Yemen, blockades Qatar & foments crisis in Lebanon.

Zarif and his Turkish and Russian counterparts Mevlut Cavusoglu and Sergei Lavrov, respectively, held preparatory talks ahead of Syria summit that is scheduled to be held in the Russian Black Sea resort of Sochi on November 22.

The top Iranian diplomat pointed to great achievements made during 11 months of peace negotiations on the Syrian crisis and said, “This issue shows that if other regional countries also…take up to cooperation instead of wrong policies, beneficial results may be achieved.”

“The Astana process shows that when influential countries in the region cooperate, these three countries can achieve what all other countries could not,” Zarif said.

Zarif also noted that during the Antalya meeting, the three foreign ministers exchanged views about the Sochi summit and reached agreements in this regard.

Speaking to reporters at the end of the Antalya meeting, the Russian foreign minister said he and his Iranian and Turkish counterparts had reached an agreement on all key issues.

“We have gathered to discuss certain issues related to preparations for the summit of the three countries’ president,” Lavrov said, adding, “The work was very useful, we have reached agreement on all the key issues.”

Iranian, Russian and Turkish Presidents Hassan Rouhani, Vladimir Putin and Recep Tayyip Erdogan plan to meet in Sochi to discuss the latest developments about the Syrian crisis and ways to resolve it.

Syrian army soldiers, backed by pro-government fighters from popular defense groups, on Sunday fully liberated the strategic city of al-Bukamal in the country’s eastern province of Dayr al-Zawr and on the border with Iraq from the clutches of Daesh Takfiri terrorist group. The city was the extremist group's last stronghold in the Arab country.