It flies, and it snoops: Norway’s pricey F-35s caught sending ‘sensitive data’ to US

TEHRAN, November 26 -Norway’s new F-35 fighter jets boast an impressive array of high-tech gadgetry, but Norwegian defense officials were surprised to learn of one unadvertised feature: the pricey plane relays sensitive data back to its US manufacturer, Lockheed Martin. 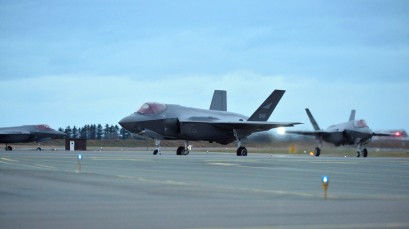 The Royal Norwegian Air Force recently received the first three of the 40 F-35 fighter jets it ordered from Lockheed Martin. Major General Morten Klevar, the director of Norway’s F-35 program, has described the fabled fighter jet as “crucial to the continued modernization of our armed forces and our ability to preserve Norwegian and allied security and interests.”

But while pouring billions of dollars into the troubled jet, the Scandinavian nation may have got more than it bargained for.

Norway is the first foreign country to acquire the F-35 mission data file from the US Air Force’s (USAF) 53rd Electronic Warfare Group’s Partner Support Complex – software which allows the aircraft to perform its primary missions and provides the pilot with “an extraordinary situational awareness”. But Norwegian defense officials soon discovered that their fancy fleet of F-35s also automatically transmit sensitive data to Lockheed Martin’s servers in Fort Worth, Texas, after each flight.

“Due to national considerations, there is a need for a filter where the user nations can exclude sensitive data from the data stream that is shared by the system with the manufacturer Lockheed Martin,” said Defense Ministry senior consultant Lars Gjemble, as cited by Norway’s ABC Nyheter.

Although Gjemble hailed the F-35 as a major upgrade for Norway’s air capabilities, he also stressed that the data being beamed to Fort Worth could potentially compromise the security of the pilot, likening Lockheed’s data leeching to “information your iPhone shares with the manufacturers.”

Norway has committed to buying 40 F-35 fighter jets, and is expected to purchase an additional 12, altogether totaling NOK 67.9 billion ($8.36 billion). Some of the details surrounding the deal have already raised eyebrows. In what has been described as a “blunder of epic proportions,” it was revealed earlier in November that the pricey aircraft will be housed in tents until proper hangars can be constructed – a project expected to be completed in 2020.

Share to
Related News
US lawmakers seek to ban sales of F-35s to 'hostile & thuggish' Turkey
Despite US threat over S-400 deal, first F-35s due to arrive in Turkey in June
Body of hero Russian Su-25 pilot retrieved from Syria & returned to Russia — MoD
IPhone addiction may be a virtue, not a vice for investors
Norway suspends arms exports to UAE over Yemen War
Norwegian man sentenced to more than 7 years for joining Daesh
Turkey withdraws troops from NATO drills in Norway
Norway defies Trump, enters $4-billion deal with Iran
Tags
Norway ، snoops ، sensitive data
Your Comment