TEHRAN, November 28 - Qatari Foreign Minister Mohammed bin Abdulrahman Al Thani says Lebanon is the latest target in a Saudi campaign of intimidation, stressing that the Riyadh regime is simply a “bully” that risks destabilizing peace and stability in the Middle East region. 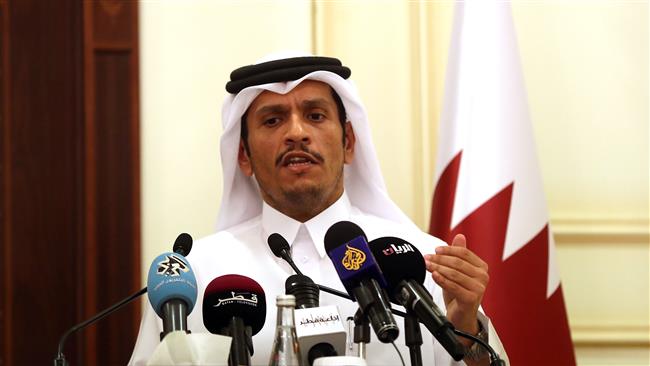 TEHRAN, Young Journalists Club (YJC) - Speaking at a round table discussion at a conference in London, the top Qatari diplomat stated that the resignation of Lebanese Prime Minister Saad al-Hariri was a Saudi decision and forced on him during his time in Riyadh.

“Lebanon is a fragile country, and pressuring the prime minister to resign and leave a vacuum in a country – which is very sensitive for everybody – is a counter-productive policy,” Al Thani said.

He added, “This is a big country bullying a small country – we have seen it in Qatar and now we are seeing it repeated in Lebanon.

“Thanks to God and all the allies that contained the situation before it evolved and got worse … If it was not contained from the beginning we would have a horrific impact.”

Hariri arrived in Beirut late on November 21, more than two weeks after unexpectedly announcing he had quit his post. All political factions in Lebanon had called on him to return back home.

Top Lebanese officials and senior politicians close to Hariri had earlier said that he had been forced to resign, and that Saudi authorities were holding him captive.

Al Thani also made a reference to the ongoing Saudi-led diplomatic and trade boycott against Qatar, saying a list of 13 demands issued by Saudi Arabia, Bahrain, the United Arab Emirates (UAE) and Egypt in exchange for lifting the restrictions were impossible to meet, and a “clear indication that they don’t want [the agreement] to be accepted.

“They don’t want to resolve this - they want our country in submission, which is the main reason they started the entire thing. This is just part of a pattern of impulsive leadership … They entered this conflict with no exit strategy,” he added.

“No one has identified a strategy; no one has any idea on the way forward with them,” the Qatari foreign minister pointed out.

Saudi Arabia, the UAE, Bahrain and Egypt all cut off diplomatic ties with Qatar on June 5, after officially accusing it of “sponsoring terrorism.”

Al Thani noted that the Middle East could not afford more turbulence as conflict continues in Syria, Yemen, Iraq and Afghanistan.

“Although the Middle East was once a region of peace and co-existence, it has unfortunately been transformed into a region of turbulence and totalitarianism, where extremism flourishes,” he said.

“What is the root cause of terrorism? Tyranny, totalitarianism, aggression and the absence of justice,” the Qatari diplomat said.

Al Thani said 24 million children across the Middle East were being left vulnerable to recruitment by terrorist groups, authoritarianism and a lack of education and opportunity.

“We need to address this issue of regimes who are not respecting the rights of their people or the law,” he commented.