TEHRAN, November 29 - A top US military commander in Afghanistan has announced an increase in the number of forces patrolling with Afghan counterparts next year. 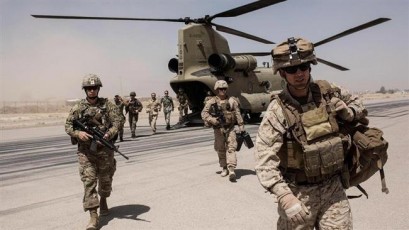 TEHRAN, Young Journalists Club (YJC) -A top US military commander in Afghanistan has announced an increase in the number of forces patrolling with Afghan counterparts next year.

General John Nicholson, who commands US and NATO forces in Afghanistan, said on Tuesday that "well over 1,000" advisors would be performing combat operations on the front lines at any given time during the fighting season in 2018.

The commander stressed that such operations have already been conducted by smaller numbers of US troops this year but the ranks would "increase dramatically,” as "There will be greater risk.”

Nicholson claimed that the measure came as part of Trump’s revamped strategy designed to “turn the corner” on the 16-year war against the Taliban militants in the Central Asian country, which has already seen a sharp uptick in airstrikes and an additional 3,000 troops flow in.

The commander vowed that Washington would go to “great lengths” to ensure American troops near the front lines are as well protected as possible to help Afghans hunt down Taliban militants in simultaneous offensive operations across the country.

Nicholson said the troops would be backed by a full array of air support and surveillance capabilities.

Calling the new strategy “a game changer,” the commander of US and NATO forces in Afghanistan boasted, “That’s why I express confidence that we are on our way to a win.”

The Tuesday remarks came while Nicholson said earlier this week that the fight in Afghanistan was “still in a stalemate.”

In August, Trump announced his controversial war strategy for Afghanistan. In a blatant U-turn from his campaign pledges to end the 16-year occupation of Afghanistan, the businessman-turned-politician said that his views have changed since entering the White House and that he would continue the military intervention “as long as we see determination and progress” in Afghanistan.

The United States -- under Republican George W. Bush’s presidency -- and its allies invaded Afghanistan on October 7, 2001 as part of Washington’s so-called war on terror. The offensive removed the Taliban regime from power, but after more than one and a half decades, the foreign troops are still deployed to the country.

After becoming the president in 2008, President Barack Obama, a Democrat, vowed to end the Afghan war -- one of the longest conflicts in US history – but he failed to keep his promise.

Trump, who has spoken against the Afghan war, has dubbed the 2001 invasion and following occupation of Afghanistan as "Obama's war," but he has also announced to deploy thousands of more troops to the war-torn country, signaling a policy shift.

Since 2001, 1,874 US soldiers have been killed in action in Afghanistan and more than 20,000 more have been wounded, according to Pentagon data.