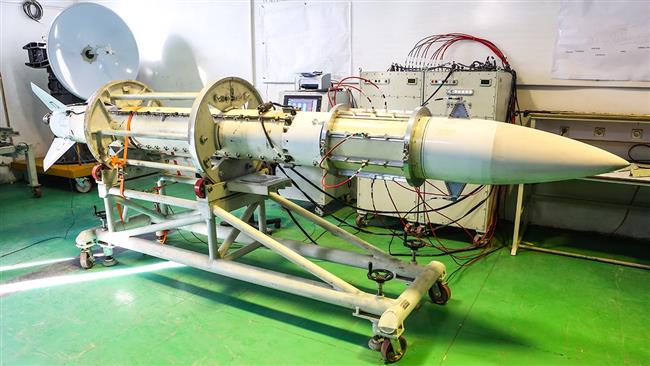 TEHRAN, Young Journalists Club (YJC) - The achievements were unveiled in the presence of Brigadier General Mohammad Hossein Dadras, the Army’s second-in-command on Wednesday.

The ceremony witnessed the unveiling of Otto fuel, which is combustible in the absence of oxygen, enabling the underwater propulsion of torpedoes. Torpedoes thus-propelled can be extended in range toward higher operational capability. The technology for the fuel’s production had so far been monopolized by the United States.

The conceptual and engineering design of the Persian Gulf training warship was also unveiled during the ceremony. The 135-meter-long and 16-meter-wide vessel is to be outfitted with the Navy’s latest technologies and equipment and can carry as many as 230 trainees.

Other advancements included the Mersad Project, featuring the designing and development of a comprehensive system needed for the testing of lightweight anti-submersible torpedoes; the Ra’d missile system’s testing mechanism, a sea-based missile system that can be used against all types of floating and flying targets.

The Damavand remote-controlled vessel fitted with anti-electronic warfare equipment was also unveiled. During combat, the vessel can be released from its naval unit and used to jam enemy radar, sonar, and fire control systems.

Nano material used for the covering the surface of vessels and naval equipment was also showcased. Application of such material helps reduce maintenance costs and contributes to the endurance of the objects it is used on.

Tuesday was Iran’s National Navy Day. During a meeting with Navy commanders and personnel on the day, Leader of the Islamic Revolution Ayatollah Seyyed Ali Khamenei hailed Iran’s naval defense achievements, underlining the need for the Navy to speed up its progress in various fields.

The Leader said the Navy was “on the frontline” of defending the nation, and stressed the necessity of enhancing its combat readiness and military equipment.