TEHRAN, November 30 - The White House has developed a plan to oust US Secretary of State Rex Tillerson, whose relationship with President Donald Trump has been tense, and replace him with CIA Director Mike Pompeo, according to a new report. 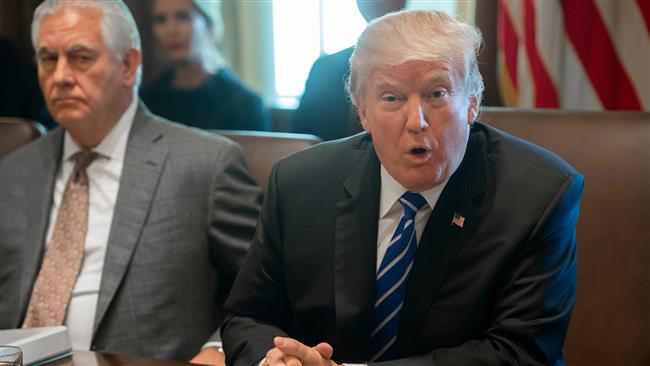 Under Kelly’s plan, Senator Tom Cotton, a Republican from Arkansas, would replace Pompeo at the CIA. The shake-up would happen around the end of the year or shortly afterward, the newspaper said.

The Senate confirmed Tillerson, 65, as secretary of state in early February. He had previously been the CEO of ExxonMobil, one the largest oil and gas companies in the world.

It was not immediately clear whether Trump has given final approval to the plan, but he has been said to have been at odds with Tillerson over a host of major foreign policy issues.

Tillerson’s departure has been widely anticipated for months, but associates have said he planned to remain until the end of the year. Even so, an end-of-year exit would make his time in office the shortest of any secretary of state in nearly 120 years.

Tensions between Tillerson and Trump have been simmering for months, sometimes visibly. The two have publicly diverged on some of the administration's most crucial foreign policy challenges, including Iran and North Korea.

Last month, Tillerson dismissed a report by NBC that said he had been on the verge of resigning from his position during the summer over mounting policy disputes with the White House.

NBC reported in early October that Tillerson referred to Trump as a “moron” after a meeting in July at the Pentagon with members of his national security team and Cabinet members.

A few days after the report, Trump harshly criticized Tillerson in an interview with Forbes magazine, suggesting that he's smarter than the top US diplomat.

"I think it's fake news, but if he did that, I guess we'll have to compare IQ tests. And I can tell you who is going to win," Trump said.