TEHRAN, December 4 -A senior Iranian parliamentarian says the Islamic Republic is in talks with a number of countries to sell its surplus heavy water, a nuclear byproduct, after the US decided to halt its purchases. 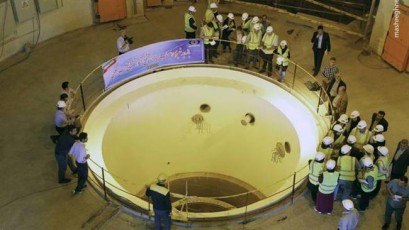 TEHRAN, Young Journalists Club (YJC) -A senior Iranian parliamentarian says the Islamic Republic is in talks with a number of countries to sell its surplus heavy water, a nuclear byproduct, after the US decided to halt its purchases.

Tehran has to sell its surplus heavy water under the 2015 nuclear agreement with world countries which requires that the inventory not exceed 130 tonnes.

The administration of former US President Barack Obama announced in late 2016 that it would spend more than $8 million to purchase Iranian heavy water but the President Donald Trump put a stop to the purchases last month.

MP Mojtaba Zonnour, who heads the Iranian Parliament's Nuclear Committee, has said that Washington's decision breaches the spirit of the nuclear agreement, known officially as the Joint Comprehensive Plan of Action (JCPOA).

"This American action is not a violation of the JCPOA but it is in conflict with its spirit," he said Monday, explaining that as per the text of the deal, the US is not required to buy heavy water from Iran.

"The Islamic Republic should engage in marketing to sell its heavy water and negotiations have been held with some countries to that end," Tasnim news agency quoted him as saying.

The lawmaker said if the US prevents other countries from buying the Iranian heavy water or imposes fresh sanctions in this regard, that will definitely constitute a violation of the JCPOA.

Europe and Russia are reportedly other clients of the Iranian heavy water but Zonnour said certain countries interested in buying the material from Iran faced pressure from the US and therefore "backed down on their plans."

According to the lawmaker, Iran currently produces about 20 tonnes of heavy water a year, some of which is used domestically and the surplus is transported abroad.

Zonnour put Iran's current heavy water stock at 130 tonnes, the limit which should not be exceeded under the nuclear agreement.

"Part of this amount is kept inside the country and another part is transferred to an area under Iran's ownership in Oman so that the heavy water stock does not exceed 130 tonnes."

Last month, the head of the Atomic Energy Organization of Iran (AEOI) Ali Akbar Salehi said the country had transferred 11 tonnes of heavy water to Oman in total.

Iran, he said, had sold 70 tonnes of heavy water, adding talks were underway with a number of countries, especially in Europe, to sell more.