TEHRAN, December 8 - Palestinian officials have called off a planned meeting with US Vice President Mike Pence to protest Washington’s recognition of Jerusalem al-Quds as Israel’s “capital.” 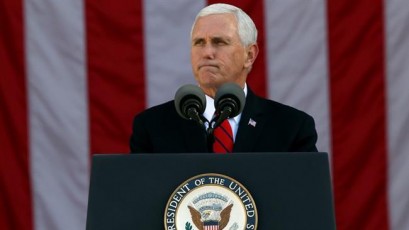 Secretary General of the West Bank-based Palestinian Fatah party, Jibril Rajoub, said Thursday that Pence, who is scheduled to visit the occupied West Bank to meet with President Mahmoud Abbas later this month, was “unwanted in Palestine.”

He said that no official from the Palestinian government, including President Abbas, would meet with Pence during his visit to the region.

“In the name of Fatah, I say we will not welcome Trump’s deputy in Palestinian territory,” Rajoub said.

The Palestinian official said that Pence had requested to meet with Abbas in Bethlehem on December 19, adding that a “meeting like this won’t happen.”

However, a White House aide said Pence “still plans to meet with Abbas as scheduled” and “believes it would be counterproductive for him to pull out of the meeting.”

Late on Wednesday, Deputy Palestinian UN envoy Feda Abdelhady-Nasser said in a letter to the UN Security Council that Trump’s move violates numerous resolutions that prohibit changes to the status of Jerusalem al-Quds.

She warned that the provocative move would only aggravate the already-heightened tensions, and could lead to “a never-ending religious war.”

The diplomat warned that the provocative move would only “aggravate the already-heightened tensions” in the region.

The letter also warned that “extremists” would exploit the situation to their own benefit.

The Security Council is scheduled to meet later on Friday to discuss Trump’s announcement.

Palestinian resistance group Hamas has called for a new intifada against Israel, calling Friday “day of rage” across the Palestinian occupied territories.