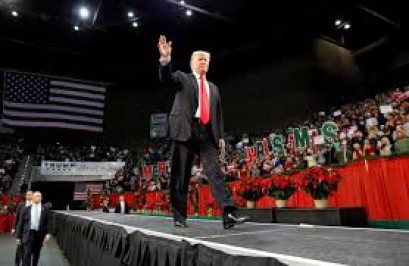 Trump, speaking to a stadium of supporters in Pensacola, Florida, near the Alabama state line, touted his work to quit or renegotiate trade deals and called on Democrats to support a measure that would avert a government shutdown.

Trump highlighted familiar themes from his political rallies: criticism of violence in Chicago, which he suggested was less safe than Afghanistan, as well as his commitment to improving U.S. border security and to crack down on immigration.

But he made a point of using the rally to note his desire to get Moore elected.

”Get out and vote for Roy Moore,” Trump said ahead of Tuesday’s election.

The race in the heavily Republican state heated up last month with accusations that Moore sexually assaulted or behaved inappropriately with several women when they were teenagers and he was in his 30s.

Moore, a conservative Christian and former state judge, denies the allegations, and Trump formally endorsed him on Monday.

“He will never, ever vote for us. We need somebody in that Senate seat who will vote for our Make America Great Again agenda,” Trump said.

Moore’s race against Jones, a former attorney, has come amid an array of allegations of sexual misconduct that have brought down men in media, politics, and entertainment.

Trump’s support for Moore puts him at odds with other lawmakers in the Republican Party, particularly Senate Majority Leader Mitch McConnell.

In his speech, Trump did not directly address the sexual harassment allegations against Moore, but he mocked the fact that one of Moore’s accusers acknowledged on Friday that part of an inscription that she had said Moore had written in her high school yearbook was in fact penned by her.

“Did you see what happened today? You know, the yearbook? ... There was a little mistake made - she started writing things in the yearbook,” Trump said.

The accuser, Beverly Young Nelson, said last month Moore sexually assaulted her when she was 16 and he was a prosecuting attorney in his 30s.

Moore denies ever having known Nelson. Nelson says the yearbook entry shows that they were acquainted.

Nelson’s attorney Gloria Allred said on Friday a handwriting analysis had concluded that Moore had signed the yearbook.

The White House reiterated on Friday that Moore had denied the accusations against him.

“We find these allegations to be troubling and concerning, and they should be taken seriously. Roy Moore has also maintained that these allegations aren’t true, and that should also be taken into account,” White House spokesman Raj Shah told reporters on Air Force One during Trump’s flight to Florida.