Johnson says Britain not to move embassy to Jerusalem al-Quds

TEHRAN, December 9 - British Foreign Secretary Boris Johnson said that his country is against Trump’s decision to recognize Jerusalem al-Quds as ‘capital’ of Israel, saying that, “Unilateral moves make it difficult to achieve peace.” 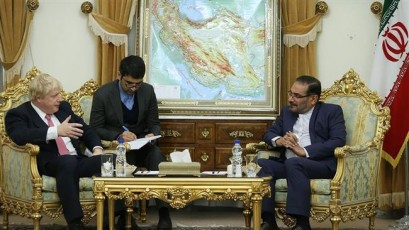 TEHRAN, Young Journalists Club (YJC) -  In a meeting with Secretary of Iranian Supreme National Security Council Ali Shamkhani here in Tehran on Saturday, he said, “London has not made any decision to relocate its embassy to Jerusalem al-Quds and we will keep our embassy in Tel Aviv.”

He also stressed more efforts to settle problems hindering complete implementation of the nuclear deal, especially in financial and banking ties, saying that, “JCPOA is a multilateral and international agreement whose implementation is in favor of global peace and stability.”

Shamkhani, for his part, said economic cooperation and exchanges between Iran and the UK is not satisfactory in post-JCPOA era and facilitating banking ties could pave the way for expanding cooperation in other fields.

He also blasted European countries and the US for their refusal to comply with their commitments to the deal, saying that the US behavior toward the agreement is a complete disaster, and in case this approach continues, US credibility would be damaged and international agreements would be put into question.

Shamkhani said that Trump’s refusal to certify the agreement means the US does not abide by international agreements.

“The Islamic Republic of Iran, given passiveness of other sides towards inappropriate behaviors of Washington, has made the required decisions based on national interests and its responsibility, to deal with such moves and return to the pre-agreement condition in case it is needed.”