TEHRAN, December 10 - Several thousand supporters of opposition leader Mikheil Saakashvili rallied in the Ukrainian capital Sunday, demanding his release from jail and calling for the country's president to be impeached. 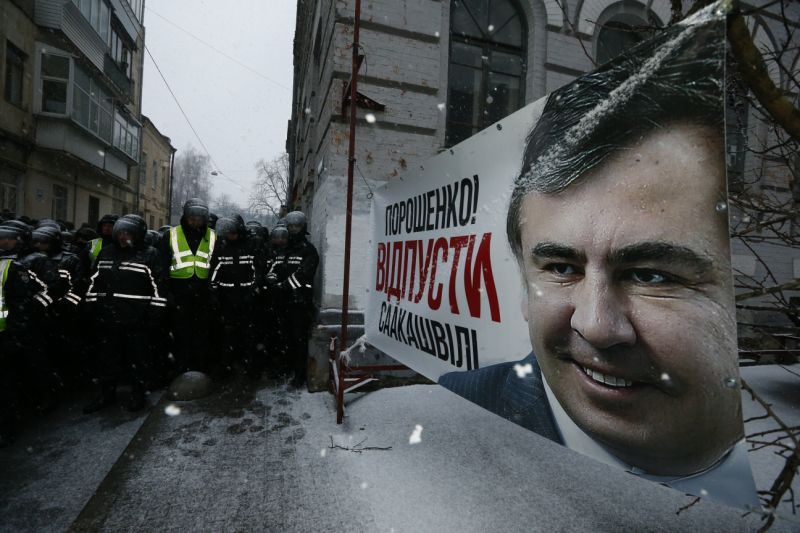 Saakashvili rejected the allegations, and his lawyer said he was refusing food to protest his detention.

Saakashvili's supporters marched across downtown Kiev, chanting "Down with the Gang!" and "Impeachment!"

They rallied on the capital's main Independence Square, the Maidan, which was the focus of massive protests that drove Ukraine's former Russia-friendly president from power in February 2014, and then walked toward the where Saakashvili has been held.

Saakashvili faces the prospect of being sent back to his native Georgia, which has sought him on abuse of office charges.

Saakashvili's wife, Sandra Elisabeth Roelofs, said Ukrainian authorities "crossed a red line" by arresting him. In a reference to the business background of Poroshenko, who ran a chocolate business before his election, she said, "We need to show him that politics is not business and people are not merchandise."

The demonstrators smashed the windows of a candy store belonging to Poroshenko's company, Roshen.

Yegor Sobolev, an ally of Saakashvili's who was removed Thursday as chairman of a parliamentary anti-corruption committee by Poroshenko's faction and its allies, called for the president's dismissal.

"Impeachment is a way to move from kleptocracy to democracy," Sobolev said at the rally.

Protester Valery Shapovalov carried a big poster showing Poroshenko behind bars.
"Poroshenko is an oligarch, and it's silly to expect him to fight corruption," Shapovalov said. "Bees can't oppose honey."

Activists of the Right Sector, a far-right nationalist group, and veterans of the war against pro-Russia separatists in eastern Ukraine joined the rally.

Saakashvili was a key figure in the 2003 Rose Revolution protests that drove Georgian President Eduard Shevardnadze from office. He served two terms as Georgian president in 2004-2013, winning broad acclaim for his anti-corruption efforts, but drawing criticism over a disastrous war with Russia and what his opponents saw as an authoritarian streak.

Poroshenko named him the governor of Ukraine's Odessa region in 2015, but Saakashvili resigned the following year, claiming that Poroshenko and other officials were impeding anti-corruption reforms and becoming a strong critic of his former patron.

He forced his way into Ukraine in September, barging across the border with Poland with the help of a crowd of supporters.