Rouhani: Israel has no military power to attack Iran

Tehran, YJC. President-elect says that Iran’s record in the Imposed War by Saddam Hussein, inhibits a military attack by Israel. 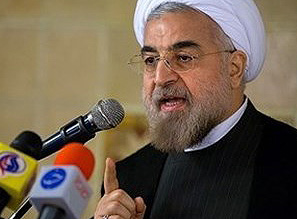 Speaking in the 21st Conference for the Intimacy of the Pioneers of Jihad and Martyrdom in Tehran, Hassan Rouhani stated that the victories of the 8 years of the Holy War belong to all, Fars news agency reports.

The President-elect then pointed to the recent presidential elections and said "In the first days of the elections, many people were gloomy and sad and there was some cynicism, doubt, and suspicion. But we all saw what God did to hearts and how the Supreme Leader guided the society step by step with his insight.”

Rouhani asserted "Unless our national power is developed the enemy will not bow down to us, because the national power means a powerful economy, internal unity, and a robust foreign policy.”

He also pointed to a series of threatening statements from abroad and said "They say many things in the world. They say, for example, that all options are on the table, or some wretched country within the region threatens us day in day out. But you would only laugh at them.”

The President-elect said that the Zionist regime is a nobody whose ideas of attacking Iran are checked with Iran’s brilliant record in its war with Iraq.

"They know that if something happens, the people of the Islamic Iran will resist more sincerely, more daringly, and more powerfully,” he asserted.