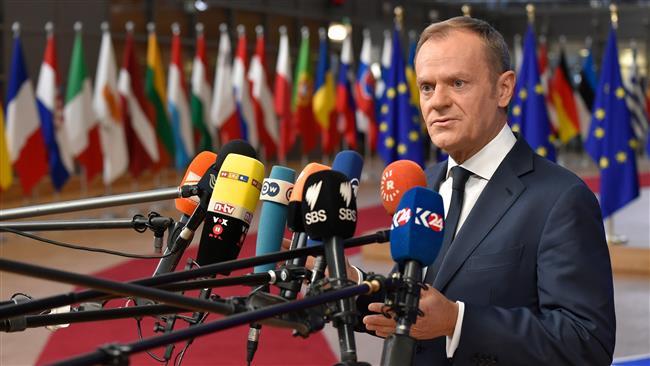 TEHRAN, Young Journalists Club (YJC) - “EU leaders reiterate firm commitment to the two-state solution and, in this context, the EU position on Jerusalem [al-Quds] remains unchanged,” President of the European Council Donald Tusk said in a message posted on his official Twitter account on Thursday.

The tweet came after EU leaders discussed Trump’s decision at a summit underway in the Belgian capital of Brussels.

On December 6, Trump sparked international outrage as he declared that Washington was recognizing Jerusalem al-Quds as the “capital” of Israel and that he had instructed his administration to begin the process of moving the American embassy from Tel Aviv to the ancient city.

The dramatic shift in Washington’s Jerusalem policy has drawn fierce criticism from the international community, including Washington’s own allies, while triggering demonstrations against the US and Israel worldwide.

Thursday’s statement by the bloc’s heads of state and government adds fresh weight to the criticism of Trump’s move.

According to media reports, French President Emanuel Macron had lobbied for a sharper statement against Trump’s declaration.

Israel failed to torpedo the statement, but managed to get the French text watered down with the help of the Czech Republic and Hungary.

On December 7, EU foreign policy chief Federica Mogherini voiced alarm at the US decision and said it could take the region “backwards to even darker times.”

Mogherini also reaffirmed the position of the European Union on Tuesday, saying East Jerusalem, which hosts the al-Aqa Mosque compound, shall become the capital of a Palestinian state and the western part of the city shall go to Israel as part of a so-called two state solution.

“We have made it clear that we will continue to respect the international consensus on Jerusalem [al-Quds], as Europeans, including the relocation of our embassies until the final status of Jerusalem [al-Quds] is resolved through direct negotiations between the parties,” she added.

The entire city went under Israel’s control after the regime annexed East Jerusalem al-Quds in 1967 during the Arab War.