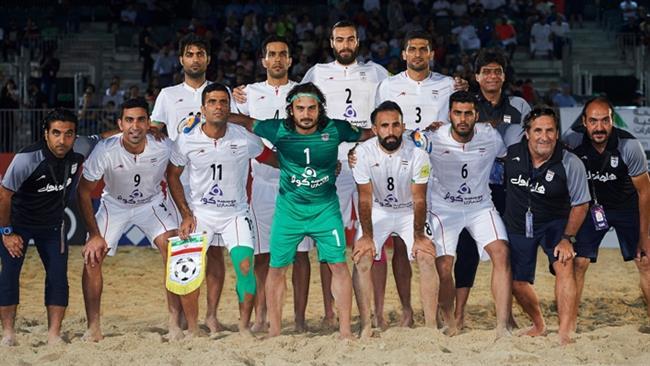 TEHRAN, Young Journalists Club (YJC) - On Friday, the Iranian side managed to find a very good way of forgetting the previous day’s narrow 6-7 defeat to Spanish futsal club Levante Unión Deportiva in its opener, and powered to an 8-4 win over the Argentine squad.

The Persians started the match in a dominant fashion, and their 34-year-old forward Farid Boulokbashi opened the scoring for his outfit.

Pars Jonoobi’s defenders Mostafa Kiani Harchegani and Mohammad Masoumizadeh then made it 3-0 by the end of the first half.

The Iranian beach soccer team obtained a 4-0 run in the second period, and virtually sealed the triumph.

After that, Club Atlético Rosario Central forward Angelo Agustini sought to add some light to his team’s game and netted the first goal for the Argentines.

The South Americans managed to reduce the deficit with two additional goals by midfielder Sarandi Sobral Benitez, known by the nickname Pampero, before Lucas Ponzetti jabbed the last one.

Pars Jonoobi players could place at the back of their opponent’s net four times later on, and kept their hopes of getting into the final alive.

They will face Clube de Regatas do Flamengo, commonly referred to as Flamengo, in their next match on Saturday, and need a wide win over the Brazilian side to progress.

The Mundialito de Clubes 2017 kicked off in Vargem Grande Paulista, São Paulo, Brazil, on December 14, and will conclude on December 17, 2017.