A quarter of Rohingya refugee children suffer from malnutrition

TEHRAN, December 22 - A quarter of Rohingya children under the age of five who fled to Bangladesh from Myanmar suffer from potentially life-threatening levels of malnutrition, the United Nations said on Friday. 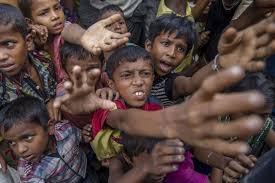 TEHRAN, Young Journalists Club (YJC) - The UN children's agency said that three health and nutrition surveys conducted between October 22 and November 27 showed up to 25 percent of the young children crammed into Bangladeshi refugee camps have acute malnutrition, among other maladies.

"Nearly half the children surveyed have anaemia, up to 40 percent have diarrhoea, and up to 60 percent have acute respiratory infections," UNICEF spokesman Christophe Boulierac told reporters in Geneva.

More than 655,000 people from the Rohingya Muslim community have fled Myanmar's Rakhine state since late August during military operations that the UN has described as ethnic cleansing.

Around half of them are children.

Bangladesh's UNICEF head Edouard Beigbeder said that "our worst fears have been confirmed".

"Refugee children who have already endured unimaginable suffering in fleeing their homes are now facing a public health crisis," Beigbeder said in a statement.

On November 3, UNICEF warned that 7.5 percent of the children in one of the camps in Bangladesh's Cox's Bazar district were at risk of dying from acute malnutrition.

New surveys at the Kutupalong and Nayapara refugee camps, as well as other make-shift settlements, that included more than 1,700 children highlighted the worsening situation.

"Less than 16 percent of children are consuming a minimal acceptable diet," UNICEF said.

Last week, Doctors Without Borders (MSF) said that at least 6,700 Rohingya Muslims had been killed in the first month of the Myanmar army crackdown in the Rakhine state.

The figure is the highest estimated death toll yet of violence that erupted on August 25 and triggered a massive refugee crisis, sending some 647,000 Rohingya fleeing across the border to Bangladesh.

The UN and US have described the military operation as "ethnic cleansing" of the Muslim minority, but have not released specific death tolls.

"At least 6,700 Rohingya, in the most conservative estimations, are estimated to have been killed, including at least 730 children below the age of five," MSF said last Thursday.

The group's findings come from six surveys of more than 11,426 people in Rohingya refugee camps and cover the first month after the crisis erupted.