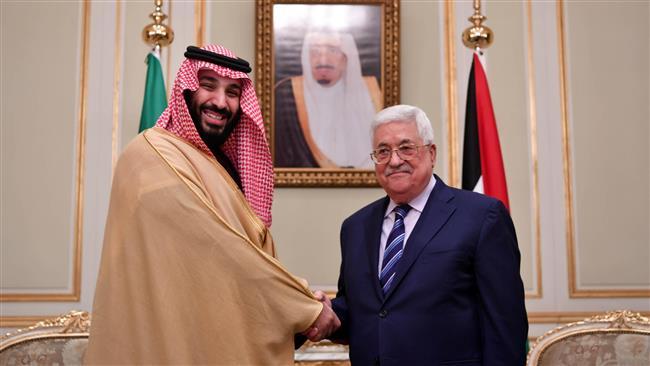 The meetings came days after Abbas formally declared that Palestinians will no longer accept the US as a mediator to resolve the decades-long Israeli-Palestinian conflict.

“We do not accept any role of the United States in the political process from now on, because it is completely biased towards Israel,” Abbas told an urgent summit of the Organization of Islamic Cooperation (OIC) in the Turkish city of Istanbul on December 13.

The announcement followed US President Donald Trump's controversial recognition of Jerusalem al-Quds as the “capital” of Israel and his plan to relocate the American embassy from Tel Aviv to the ancient city.

The Palestinian officials with knowledge of Abbas' meeting with bin Salman told the Middle East Eye news portal that the latter had described the US as "the only game in town" concerning the so-called peace process.

"The US is the only one with real influence on Israel, it's the only country that can put pressure on Israel in any peace process and no one else can do [that], neither EU, nor Russia or China," the officials quoted the first in line to the Saudi throne as telling the Palestinian president.

They noted that bin Salman had attempted to use "soft diplomacy" to persuade Abbas to accept Washington's proposal and receive US Vice President Mike Pence in his planned visit to the region. Pence, however, postponed his trip amid tensions over Washington's policy shift on Jerusalem al-Quds.

Abbas told "the [Saudi] crown prince, 'if the US is willing to declare that a peace process is based on the [so-called] two-state solution on the '67 boundaries - including East Jerusalem as the capital of the state of Palestine - we are ready to engage immediately, but if they want to drag us to the Israeli version of peace, we cannot'," they added.

The officials told MEE Abbas was aware of the new US plan but regarded it as a copy of Israeli Prime Minister Benjamin Netanyahu's vision: a mini-state on half of the West Bank and Gaza Strip, without Jerusalem al-Quds, refugees, borders and water.

Bin Salman was believed to have told Abbas in a previous meeting earlier this month that the US was "preparing for a peace deal, and this deal might not look good at the beginning but at the end it will be good."

Palestinian officials have repeatedly expressed worry that Saudi Arabia is forgoing important Palestinian rights as it acts behind the scenes to advance a US “grand bargain” over the Israeli-Palestinian conflict that heavily favors Israel.

Saudi Arabia’s maneuvering over Palestine comes amid increasing reports that the Riyadh regime is preparing a normalization of ties with Tel Aviv.