Claim of Iran military aid to Yemen, new US game in Mideast: Larijani

TEHRAN, December 24 - Iran’s Parliament Speaker Ali Larijani has once again dismissed the US claim about the Islamic Republic's military assistance to Yemen, saying Washington is playing a new game in the Middle East. 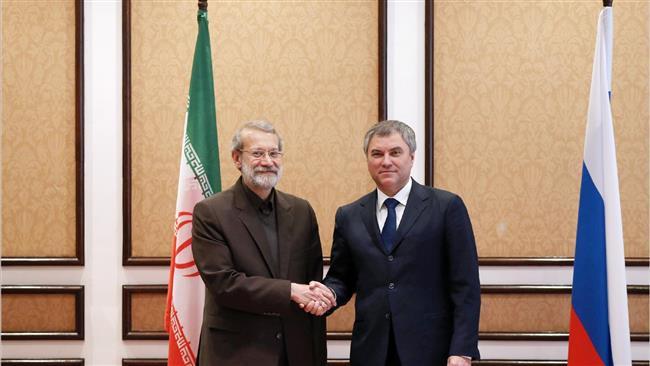 TEHRAN, Young Journalists Club (YJC) - Larijani made the remarks in a meeting with Chairman of Russia's State Duma Vyacheslav Volodin in the Pakistani capital of Islamabad on Sunday. The two top parliamentarian officials are in Islamabad to participate in a conference on the challenge of terrorism and inter-regional connectivity.

"Russia is a friendly country of Iran and knows well that we have not given any missile to Yemen," Larijani said on Sunday, adding that the United States sought new adventurism in the region through such claims.

US Ambassador to the United Nations Nikki Haley on December 14 appeared in a staged show in front of a large and charred tube that she claimed was "concrete evidence" that Iran was providing missiles to Yemeni forces fighting against Saudi Arabia's war of aggression on their country.

Elsewhere in the meeting, Larijani stressed the importance of strengthening Iran-Russia cooperation on regional issues, including the crisis in Syria.

He warned that some countries sought to abuse the recent great achievements made in Syria in the fight against Daesh terrorist group to serve their own interests and called for vigilance in the face of such plots.

The top Iranian parliamentarian emphasized that the presence of American forces in the northern Syrian city of Raqqah, which used to serve as the main Daesh stronghold in the country, had an adverse effect on the battle against terrorists, emphasizing that it was imperative to discuss the US presence in the region.

Speaking to reporters in Tehran on Saturday ahead of his departure for Islamabad, Larijani hailed as fruitful the campaign against terrorism in Syria, saying prior attempts to fight the vicious phenomenon had been unsuccessful.

"The campaign against terrorism in the past had not been so successful and after dealing with the active elements in the region ... modern approaches were pursued by the regional countries to offer a solution in the fight against terrorism," he said.

The Duma chairman, for his part, said the US sought to exploit the great achievements in Syria as a means to serve its own interests, adding that Washington had never participated in any meeting aimed at putting an end to the crisis in the Arab country.

He added that a high-ranking delegation consisting of Russian businesspeople will visit Iran next year, expressing hope that the visit will be followed by favorable results for both countries.

Share to
Related News
Iranian, Ansarullah officials discuss political solution for Yemen, aid delivery
No case for any UN action against Iran: Russia
Iran, Russia moving closer to integrating banking systems
US playing games, not fighting terrorism: Iran's Larijani
Conditions of war would have been different if Iran had given Yemen missiles: Lawmaker
Tags
Iran ، US ، Yemen ، missile
Your Comment