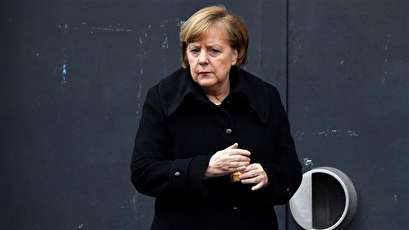 Germany has been in political limbo since elections in September, which saw heavy losses for the centrist “grand coalition” that has been ruling the country for the past four years.

Merkel, seeking a fourth term in office, has been looking to form a coalition with the center-left Social Democrats after her center-right bloc lost some support to the far right Alternative for Germany (AfD) Party in the September 24 polls and her attempts to form a three-way tie-up with the pro-business Free Democrats (FDP) and the Greens failed.

Merkel, the 63-year-old leader of the conservative Christian Democratic Union (CDU) Party, and SPD leader will meet for preliminary talks on January 3 ahead of exploratory talks scheduled for January 7 through January 12.

SPD deputy leader Thorsten Schaefer-Guembel said recent comments by some conservatives were “counterproductive for every form of government formation,” adding that the remarks had raised doubts about the will of conservatives to govern together.

He ruled out the possibility that the talks will result in a deal.

“A minority government remains an option, even if Chancellor Angela Merkel doesn’t want to acknowledge that,” Schaefer-Guembel said in an interview published Tuesday in the Passauer Neue Presse newspaper.

He cited differences between the two parties on a number of issues and rejected as “absurd” proposals by some conservatives to cut taxes for high-income earners.

A new opinion poll released on Saturday showed that nearly two-thirds of all Germans would call for Merkel’s resignation if upcoming coalition talks with the SPD also failed.

Merkel’s Bavarian sister party, the CSU, has distanced itself from the SPD through policy papers calling for corporate tax cuts, reductions in benefits for asylum seekers, higher military spending and limits on immigration.