TEHRAN, January 2 - Russia, Turkey and Syria have rejected foreign interference in the events unfolding in Iran, expressing hope that there will be no more violence and deaths in the country. 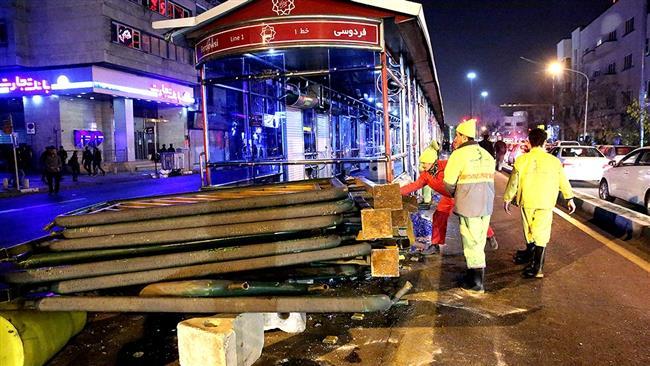 TEHRAN, Young Journalists Club (YJC) - In a statement on Monday, the Russian Foreign Ministry said, “This is Iran’s internal affair,” adding that “external interference destabilizing the situation is inadmissible.”

“We express the hope that the situation won’t develop under the scenario of bloodshed and violence,” the ministry said.

Sporadic violence has erupted in some Iranian cities since Thursday, when people held a number of initially peaceful protests against price hikes and economic problems.

The violence turned deadly in different cities, where groups of participants, some of them armed, began to launch attacks on public property, police stations and religious centers.

Over a dozen people have so far been killed amid the violence, according to state media reports.

Meanwhile, neighboring Turkey on Tuesday said it was concerned by reports of people dying and public buildings being damaged in Iran.

“We believe it is necessary to avoid violence and not succumb to provocations,” the Turkish Foreign Ministry said in a statement, adding it hoped foreign interventions would be avoided.

The comments come as the US and Israel have reacted gleefully to the developments in Iran and voiced support for the violence.

Syria on Tuesday condemned Washington and Tel Aviv for meddling in Iran’s domestic affairs, voicing solidarity with the Iranian nation.

The Syrian Foreign Ministry expressed confidence that the Iranian Leadership, government and people will be able to thwart this conspiracy and continue on the path of progress as well as “its role in backing the just causes of peoples.”

Also reacting to the events was a spokeswoman for the EU’s foreign policy chief Federica Mogherini, who said in a statement on Monday, “We have been in touch with the Iranian authorities and we expect that the right to peaceful demonstration and freedom of expression will be guaranteed.”

“We will continue to monitor developments,” the spokeswoman added.

UK Foreign Secretary Boris Johnson said earlier that “freedom of expression” and the right to “demonstrate peacefully within the law” should be respected.

He further called for dialog over issues raised by the protesters which he described as “legitimate and important.”

Johnson further expressed regret about the deaths that occurred amid the violence and called “on all concerned to refrain from violence and for international obligations on human rights to be observed.”

“We appeal to the Iranian government to respect the rights of the demonstrators to assemble and to peacefully raise their voices,” Gabriel said. He further called on all sides to “refrain from violent actions.”

President Hassan Rouhani has said the Iranian people are completely free to express their criticism of the government or stage protests according to the Constitution and citizenship rights, adding, however, the manner of doing so must result in the improvement of people’s lives and social conditions.

He has vowed that the nation would deal with a “small and minority group” of rioters and lawbreakers exploiting the protests against economic conditions.