US govt shuts down after Senate fails to pass funding

TEHRAN, January 20 -Despite 11th-hour meetings between President Donald Trump and leaders of both parties in Congress, efforts to avert a government shutdown have failed. A sticking point was the status of over 700,000 illegal immigrants. 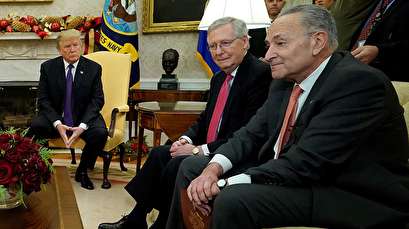 TEHRAN, Young Journalists Club (YJC) -Despite 11th-hour meetings between President Donald Trump and leaders of both parties in Congress, efforts to avert a government shutdown have failed. A sticking point was the status of over 700,000 illegal immigrants.

At midnight, as Friday turned to Saturday, the federal government closed its doors. Lawmakers, however, continued discussions on the Senate floor. The House remains in recess, awaiting a call from the chair. The likelihood of a deal to be reached remains to be seen.

“Senate Democrats own the Schumer Shutdown,” the White House said in a statement shortly before midnight. “Tonight, they put politics above our national security, military families, vulnerable children, and our country's ability to serve all Americans. We will not negotiate the status of unlawful immigrants while Democrats hold our lawful citizens hostage over their reckless demands. This is the behavior of obstructionist losers, not legislators. When Democrats start paying our armed forces and first responders we will reopen negotiations on immigration reform. During this politically manufactured Schumer Shutdown, the President and his Administration will fight for and protect the American people.”

When there was just 1 hour and 45 minutes of federal funding remaining late Friday night, the Senate fell short of the necessary 60 votes to limit debate on the continuing resolution (CR) that would temporarily provide the government spending power until February 16.

As Senate Majority Leader Mitch McConnell (R-Kentucky) waited to vote, the 50-48 tally went predictably along partisan lines mostly, with at least one Democrat and four Republicans breaking from their parties. The Republicans were Senators Jeff Flake of Arizona, Lindsey Graham of South Carolina, Mike Lee of Utah, and Rand Paul of Kentucky. The breakaway Democrats were Senators Joe Donnelly of Indiana, Heidi Heitkamp of North Dakota, Doug Jones of Alabama, Joe Manchin of Virginia, and Claire McCaskill of Missouri.

In a technical parliamentary move, McConnell was also expected to vote against the resolution, which would permit him to re-introduce the measure in the future if needed, because he voted on the prevailing side.

The GOP accused the Democrats of wanting the vote to fail, so a government shutdown would hurt Trump politically. The Democrats blamed Republicans for stalling the entire legislative process and not including permanent protections for the “Dreamers,” those nearly 800,000 illegal immigrants who arrived in the US as children and who have been covered under the Obama-era DACA program, or Deferred Action for Childhood Arrivals.

While Republicans point to DACA’s March deadline as being non-urgent, as opposed to the midnight deadline to fund the government, Democrats argue the Republicans have agreed with codifying DACA during negotiations.

Republicans had included a six-year extension of the Children's Health Insurance Program, also known as CHIP, to entice more Democrats to join them. However, the move was interpreted as cheap tokenism, as the GOP allowed the program to expire in years prior. Democrats said they wanted a more complete package, including opioid crisis funding.

Republicans had included a six-year entension of the Children's Health Insurance Program, also known as CHIP, to entice more Democrats to join them. However, the move was interpreted as cheap tokenism, as the GOP has allowed the program to expire in years prior. Democrats said they wanted a more complete package, including opioid crisis funding.

Earlier Friday evening, Senator Graham released a statement voicing support for an alternative funding bill, limited to three weeks instead of four. Such a ‘plan B’ was not expected to garner support, as shorter term efforts were deemed a “non-starter” by the White House and were rejected by Democrats as well.

Share to
Related News
Democrats say their senators caved on shutdown
US govt shutdown continues for 3rd day as Senate fails to reach funding deal
First day of government shutdown ends in standoff
Below the belt: 6 most personal attacks on Trump during his first year in White House
US government shuts down as Congress misses deadline
Tags
pass funding ، shuts down ، hour meetings between President Donald Trump and leaders
Your Comment