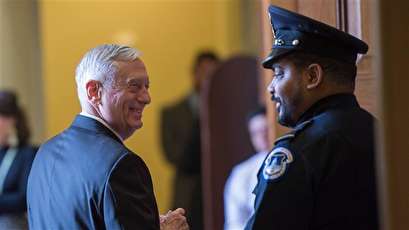 “Turkey was candid,” Mattis said during a flight to Asia on Sunday. “They warned us before they launched the aircraft they were going to do it, in consultation with us.”

Turkey launched "Operation Olive Branch," a new air and ground operation targeting the Afrin region, on Friday to oust the Kurdish People's Protection Units (YPG), which Ankara views as a terror organization and the Syrian branch of the outlawed Kurdistan Workers’ Party (PKK).

The latest airstrikes open a new front in crisis-hit Syria amid concerns that it could harm the Muslim country’s sovereignty.

Mattis asserted that he was seeing into Turkey’s latest airstrike against the US-backed forces there.

“We are working now on the way ahead. We’ll work this out… We are very alert to it. Our top levels are engaged ... And we’re working through it,” said the defense secretary, voicing further support for the Kurds.

“They have proven their effectiveness,” Mattis claimed. “It has cost them thousands of casualties. But you have watched them, with the coalition support, shred (the) ISIL caliphate in Syria.”

the US and its allies have been running a military campaign against purported terrorist targets in Syria since September 2014 without a mandate from the UN or Damascus, while backing militants fighting to topple the government of Syrian President Bashar al-Assad.