TEHRAN, January 23 -US President Donald Trump says Democrats have surrendered in the fight over the government shutdown, after they joined Republicans in reopening the government that forced hundreds of thousands of workers to stay at home without pay. 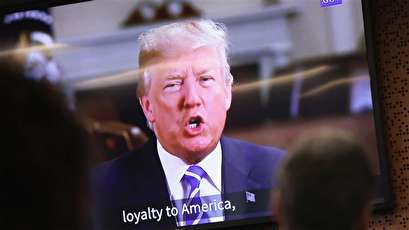 TEHRAN, Young Journalists Club (YJC) -US President Donald Trump says Democrats have surrendered in the fight over the government shutdown, after they joined Republicans in reopening the government that forced hundreds of thousands of workers to stay at home without pay.

Senate Democrats on Monday agreed with Republicans to end the government shutdown, after they received a promise from after Senate Majority Leader Mitch McConnell to move on immigration bills including support for undocumented immigrants brought to America as children. The Senate voted 81-18 on a stopgap spending measure to fund the government through February 8.

In tweet early Tuesday, Trump touted a “big win for Republicans,” hours after he signed the short-term funding bill to reopen the government.

“Big win for Republicans as Democrats cave on Shutdown. Now I want a big win for everyone, including Republicans, Democrats and DACA, but especially for our Great Military and Border Security,” Trump said.

The government shutdown, first in five years, went into effect shortly after Friday midnight, when Senate Republicans and Democrats failed to reach an agreement on the stopgap funding measure to continue government services.

The shutdown followed Congress’ failure to reach a deal on the status of “Dreamers.”

Dreamers are hundreds of thousands of undocumented migrants brought into America as children who were protected from deportation until September 2017, when the Trump administration ended the Deferred Action for Childhood Arrivals (DACA), which was created by former US President Barack Obama.

Democrats had insisted on including in any spending bill protections for those covered under the DACA program, but on Monday they signed onto the measure to fund the government without them.

“I am pleased that Democrats in Congress have come to their senses,” Trump had said earlier in the day in a statement.

Trump and Republican leaders had refused to negotiate on Dreamers while the government remained closed.