Russia: US seeks Syria breakup, not political resolution of crisis

TEHRAN, January 25 - Russia has accused the US of not contributing to a political settlement of the Syria crisis but rather seeking to divide the war-torn Arab country. 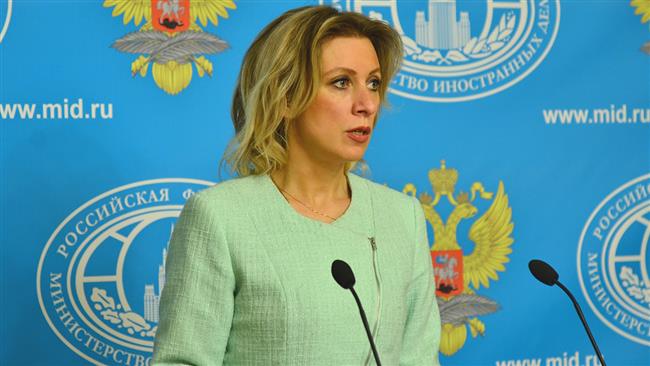 "In the wake of US Secretary of State's speech in Stanford and reports from US military sources about the creation of some armed groups under the US patronage to guard the border in northern Syria, populated mostly by Kurds, the new US strategy looks in no way other than a policy of dismembering that country," Zakharova said.

Earlier this month, the US announced that it will work, along with a coalition of its allies purportedly fighting the Daesh terrorist group, with militants of the so-called Syrian Democratic Forces (SDF) to set up a new 30,000-strong “border security” force in Syria.

Tillerson also hinted at an open-ended military presence in Syria as part of a broader strategy to pave the way for the "eventual departure" of Syrian President Bashar al-Assad.

"But let us be clear: the United States will maintain a military presence in Syria," he said.

The US diplomat further called for economic pressure on the Syrian government, saying, "Once Assad is gone from power, the United States will gladly encourage the normalization of economic relationships between Syria and other nations."

"The US continues to proclaim the removal of the legally elected president of Syria from power," she said.

"We are convinced that such an approach contradicts international law and does not contribute to a political settlement of intra-Syrian problems on the basis of UN Security Council Resolution 2254," she added.

The Russian official also warned of the "dangerous challenges" of a delay in integrating the Syrian society.

On Thursday, UN-brokered negotiations between the Syrian government and the opposition began in the Austrian capital, Vienna.

Previous rounds of Syria peace talks, which took place in the Swiss city of Geneva, have failed to achieve tangible results, mainly due to the opposition’s insistence that the Syrian government cede power.

UN Special Envoy for Syria Staffan de Mistura expressed optimism about the latest round of the discussions on Wednesday. "It's a very critical moment. Very, very critical," he said.

A parallel peace process between Syria’s warring parties in the Kazakh capital, Astana, has resulted in significant achievements instead, leading to ceasefires and the establishment of de-escalation zones across the conflict-ridden country. The Astana talks have been brokered by Iran, Russia and Turkey.

Share to
Related News
US undermining UN anti-biowarfare effort while building its own security mechanism – Lavrov
US military bases & patrol routes compromised by fitness tracker map
Iran advises Europe not to move ahead with the “US already-defeated plan”
Kennedyto give Democratic response to Trump's State of the Union address
Any presence in Syria has to be in coordination with its legitimate government – Brig. Gen. Vahidi
Trump urges Erdogan not to ‘risk conflict’ with US forces in Syria
US rejects Moscow-proposed UN mechanism to probe Syria chemical attacks based on facts
Tags
Russia ، US ، Syria
Your Comment