TEHRAN, January 27 - US President Donald Trump has called for "decisive action" against the Taliban terrorist group by “all countries” in Afghanistan following yet another terror bombing in the country’s capital Kabul that killed at least 95 people. 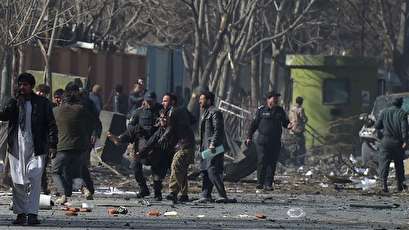 TEHRAN, Young Journalists Club (YJC) -"I condemn the despicable car bombing attack in Kabul today that has left scores of innocent civilians dead and hundreds injured,” Trump said in a statement released on Saturday. “This murderous attack renews our resolve and that of our Afghan partners."

"Now, all countries should take decisive action against the Taliban and the terrorist infrastructure that supports them," he emphasized.

The Taliban is a Takfiri terror group that in many respects resembles the Daesh (ISIL) and adheres to the Saudi-led Wahhabi interpretation of Islam, widely rejected by most Muslims and authoritative Islamic scholars, who regard Wahhabism as a deviant and extremist version of Islam invented by Saudi royal religious authorities.

Taliban and Daesh are also widely believed to be linked to and financed by the Saudi regime and their elements in Pakistan, Afghanistan and other Muslim nations.

Afghanistan has been plunged into a brutal war since the US-led military invasion of the terror-ravaged nation in October 2001 under the pretext of “war on terrorism” and with the pledge of uprooting the Taliban and bringing peace and stability to the country.

Seventeen years on, however, terrorism continues to persist throughout Afghanistan, leaving thousands of innocent people killed, injured and displaced.

"The Taliban's cruelty will not prevail," Trump further claimed. "The United States is committed to a secure Afghanistan that is free from terrorists who would target Americans, our allies and anyone who does not share their wicked ideology."

US Secretary of State Rex Tillerson also censured the "senseless" attack, insisting there can be "no tolerance for those, who support or offer sanctuary to terrorist groups."

"The Taliban's use of an ambulance as a weapon to target civilians represents inhumane disregard for the people of Afghanistan and all those working to bring peace to the country," Tillerson emphasized, adding that the attack breached "the most basic international norms."

The top US diplomat further stated, "All countries who support peace in Afghanistan have an obligation to take decisive action to stop the Taliban's campaign of violence."

Though he did not identify any country by name, the Trump administration has repeatedly accused Pakistan of neglect in cracking down on Taliban-linked militant groups such as the Haqqani faction.

Trump has also lashed out at Pakistan in early January, slamming what he referred to as Islamabad's “lies” and “deceit” in the fight against terrorism -- with Washington suspending hundreds of millions of dollars in military assistance to the country.

An explosives-packed ambulance was used for the latest Kabul bombing. Terrified survivors fled the crowded area of the Afghan capital, which was scattered with body parts, blood and debris, and hospitals were overwhelmed by the large number of wounded, estimated to number at least 158.

The Taliban claimed responsibility for the fatal attack a week after it claimed an assault on the Intercontinental Hotel in the Afghan capital, in which over 20 people lost their lives.

Many parts of Afghanistan remain plagued by terrorism despite the presence of thousands of foreign troops.