TEHRAN, January 29 -The United States has suspended a maintenance program for Abrams tanks in Iraq because one of the military vehicles has allegedly been provided to the popular Hashd al-Sha'abi force, the Iraqi press has reported. 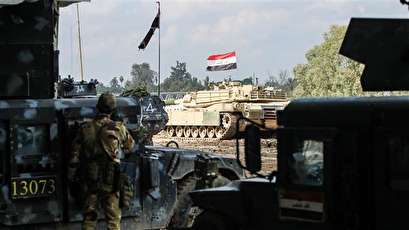 TEHRAN, Young Journalists Club (YJC) -The United States has suspended a maintenance program for Abrams tanks in Iraq because one of the military vehicles has allegedly been provided to the popular Hashd al-Sha'abi force, the Iraqi press has reported.

The US firm General Dynamics, which produces the Abrams tanks, has stopped its maintenance program in Iraq since December 2017, Baghdad-based Alghad Press reported on Sunday.

“The US tank company withdrew from its base in Baghdad’s al-Muthanna airport after finding out that Iraq violated the terms of the contract which only authorized the Iraqi army to use the US provided tanks,” the news website quoted an informed source as saying.

Alghad Press said 60 of Iraq’s 140 M1 Abrams tanks are now out of service after the battle for Mosul which the country's army recaptured last July with the help of Hashd al-Sha'abi forces.

The source said the US firm had previously informed the Baghdad government that two of the tanks had been provided to armed groups that not affiliated to the Iraqi army.

After the complaint, the government retrieved one of the tanks during an operation against Daeshin Anbar Province and pledged to take back the other by the beginning of February, it said.

According to the report, the US firm’s staff have not returned yet since they left Iraq for the Christmas holidays .

Hashd al-Sha’abi is a state-sponsored umbrella organization composed of some 40 groups, numbering more than 100,000 mostly Shia fighters. Iraqi authorities say there are between 25,000 and 30,000 Sunni tribal fighters within its ranks in addition to Kurdish Izadi and Christian units.

The fighters have played a major role in the liberation of Daesh-held areas to the south, northeast and north of the Iraqi capital Baghdad, ever since the terrorists launched an offensive in the country in June 2014.

Back in July, Iraqi Prime Minister Haider al-Abadi praised the force as the “integral” part of his country’s security system. The government, he said, was determined to protect the force, which has made enormous sacrifices in the battle against Daesh.

Last November, the Iraqi Parliament approved a law giving full legal status to the Hashd al-Sha’abi force. It recognized the the fighters as part of the national armed forces, placed under the command of the prime minister, and granted them the right to receive salaries and pensions like the regular army and police forces.