Theresa May prepares for fight with Brussels over EU citizens’ rights

TEHRAN, February 1 - EU citizens who arrive during the post-Brexit transition period will not have the same rights as those who came before, British Prime Minister Theresa May has said. 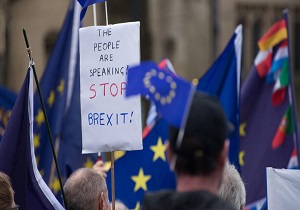 TEHRAN, Young Journalists Club (YJC) - May’s announcement that freedom of movement for EU citizens will end on Brexit day in March 2019 will set her on course for a major skirmish with EU officials. They have offered a “status quo” transition period until December 2020, including free movement and citizens’ rights for those who settle in the UK during that period.

The EU believes they had agreed with the UK that citizens coming to the country before the end of the transition period would be covered on rights for EU nationals. Brussels intends to firmly rebuff any attempt to water down the “four freedoms,” including the free movement of people, during the transition period, sources say.

UK rules for new EU migrants could include mandatory work permits, requirements to register on arrival and restrictions on access to benefits, which would not apply to EU citizens who moved to the UK before Brexit.

Speaking to reporters on a three-day trip to China, May said she was “clear” there should be a difference in the rights afforded to people who arrived in Britain after Brexit. She said the details were “a matter for negotiation for the implementation period, but I’m clear there is a difference between those who came prior to us leaving and those who will come when they know the UK is leaving.”

May added to the Guardian that she wants to resist the idea that not much would change after the UK exits the block, putting her at odds with Chancellor Philip Hammond, who said the aim was for “very modest changes” post-Brexit.

“What we’re doing now is doing the job that the British people asked the government to do which is to deliver on Brexit,”she said. “In doing that they did not vote for nothing to change when we come out of the EU.”

Guy Verhofstadt, the European parliament’s Brexit coordinator, told the Guardian: “Citizens’ rights during the transition is not negotiable. We will not accept that there are two sets of rights for EU citizens. For the transition to work, it must mean a continuation of the existing acquis with no exceptions.”

Labour MP Peter Kyle, a supporter of the Open Britain campaign for a soft Brexit, said the comments would simply increase uncertainty over Brexit for thousands of people living in the UK.

Kyle told the Independent: “The government says it values EU citizens who want to live in the UK, then tells them they’re not wanted. The Government tells businesses they want stability and continuity, then tells them their ability to recruit the staff they need will be hampered.

“Our economy must not be sacrificed on the altar of an extreme and counter-productive attitude towards immigration. If that’s what Brexit means, then everyone is entitled to keep an open mind about whether it’s the right path for the country.”

Brexit secretary David Davis told a committee of peers on Monday that the UK would robustly oppose the EU’s decision to apply all its laws and regulations to the UK until the end of 2020. “There will be an argument, I’m sure, about the issue of whether we can object to new laws that we haven’t had a say in,” he said.

Last week, Jacob Rees-Mogg, the leave-backing Tory MP who chairs the European Research Group, accused the government of threatening to turn the UK into a “vassal state” during the transition period.