TEHRAN, February 14 - Boris Johnson is talking “total nonsense” by claiming EU chiefs wants to turn the bloc into superstate, the President of the European Commission has said. 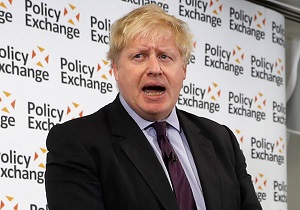 TEHRAN, Young Journalists Club (YJC) - Boris Johnson is talking “total nonsense” by claiming EU chiefs wants to turn the bloc into superstate, the President of the European Commission has said.

Asked for his response to comments made by the Foreign Secretary, Jean-Claude Juncker told reporters in Brussels that he was “strictly against” an EU superstate.

“Some in the British political society are against the truth, pretending that I am a stupid, stubborn federalist, that I am in favour of a European superstate,” Mr Juncker told a press conference.

“I am strictly against a European superstate. We are not the United States of America, we are the European Union, which is a rich body because we have these 27, or 28, nations.

“The European Union cannot be built against the European nations, so this is total nonsense.”

During the EU referendum campaign Mr Johnson had accused EU leaders like Mr Juncker of wanting to create a superstate similar to the ones sought by Hitler or Napoleon, but “by different methods”.

On Wednesday the Foreign Secretary gave a speech claiming that Brexit represented a “natural desire for self-government of the people, by the people, for the people” and a break from EU politicians’ plan to “create an overarching European state as the basis for a new sense of European political identity”.

Other EU politicians also piled in against Mr Johnson's address, in which the Foreign Secretary claimed that Brexit represented the extension of the principle of “liberal idealism”.

“Putting up barriers to the movement of trade and people and suggesting that the identity of citizens can only be national is not liberal – it’s quite the opposite,” said Guy Verhofstadt, the leader of the Liberal group in the European Parliament and the body’s Brexit co-ordinator.

Mr Juncker’s comments came after he himself made a speech laying out his vision for the future of Europe, with a bicameral legislature and directly elected single president.

“In the next European elections we need to make changes, make sure that Europe is at the heart of the whole electoral campaign,” he said.

But Mr Juncker said proposals such as trans-national lists and the merging of the European Council and European Commission presidencies would be unlikely to be implemented during his mandate due to a lack of support from member states.