TEHRAN, February 1 - In an apparent rebuke to his US counterpart, President Hassan Rouhani rejected Washington’s claim of having “sympathy” for the Iranian people, saying the nation has not forgotten the American acts of aggression in the region. 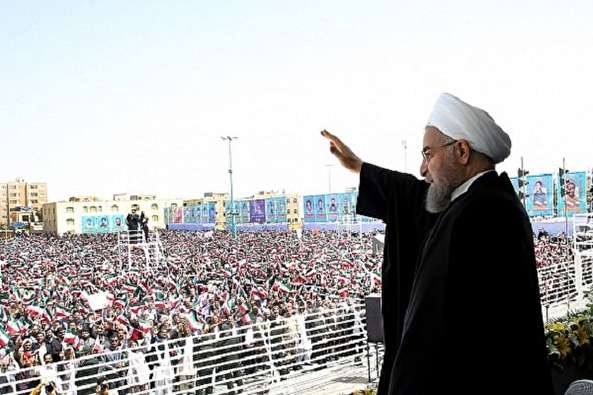 TEHRAN, Young Journalists Club (YJC) - Speaking at a large gathering of people in the southern city of Sirjan in Kerman province on Thursday, Rouhani said, “Nobody in Washington should think that they can make decisions for the great Iranian nation.”

“The people have not forgotten your acts of aggression in the region. You have invaded Afghanistan and Iraq; you are assisting Daesh and this is you who do not want security in the region.”

In his first State of the Union address to Congress on Tuesday, US President Donald Trump boasted of his meddlesome stance on a wave of riots that hit a number of Iranian towns and cities last month, saying, "I did not stay silent. America stands with the people of Iran in their courageous struggle for freedom."

Rouhani denounced the US’s claim of having “sympathy” for Iranians and said, “If you are telling the truth, return the people’s assets which you plundered. You imposed sanctions against the Iranian people for years. Were the sanctions in the interest of the people or to their detriment? You even put sanctions on medicine for the Iranian people.”

“How can you tell you have sympathy for the people of Iran?” asked the Iranian chief executive. “Can you, who have stood against our Muslim people and called them terrorists, be their supporter?”

Rouhani argued that during the former Iraqi dictator Saddam Hussein’s eight-year war against Iran and his use of chemical weapons against the country, no official in the US showed care for the Iranian people and the nation pushed out the enemy through self-sacrifice.

“Also today, the Iranian nation is more prepared than any time before to [defend its] independence, national sovereignty, security and progress and to resist against its enemies,” Rouhani pointed out.

During his State of the Union address, Trump also reiterated his hostile stance on the 2015 nuclear agreement between Iran and six world powers and said, “I am asking the Congress to address the fundamental flaws in the terrible Iran nuclear deal.”

The deal, which has been widely viewed as an achievement for global diplomacy, lifted nuclear related sanctions against Iran.

The US, under Trump, has imposed sanctions against Iran over various pretexts, including the country’s national defense program.