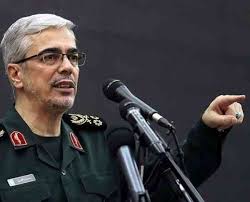 TEHRAN, Young Journalists Club (YJC) - In a Thursday message on the beginning of the ten-day ceremonies marking the anniversary of the Islamic Revolution’s victory in Iran, Chief of Staff of the Iranian Armed Forces Major General Mohammad Hossein Baqeri said Tehran is monitoring the hostile stances of the US and the Zionist regime of Israel as well as their regional and trans-regional followers on the Islamic Republic’s strategic areas of power.

The Armed Forces will never allow any interference in Iran’s defense sphere or missile power, he underscored.

The general also assured the Iranian nation of the Armed Forces’ preparedness for decisive reaction to hostile actions, saying the country’s defense power will continue to grow.

The friends and foes acknowledge that Iran has turned into an “influential international actor” by relying on its internal capacities achieved under tough sanctions and threats, Major General Baqeri went on to say.

In comments in October 2017, Leader of the Islamic Revolution Ayatollah Seyed Ali Khamenei had also rejected the idea of negotiations on Iran’s defense power, stressing that the country will press ahead with the plans to boost its might and build up its defense capabilities.

“As we have announced several times in the past and announce it once again, the country’s defense capabilities and power are not subject to negotiations and bargaining,” Ayatollah Khamenei said at the time.

“We will have no bargaining and dealing with the enemy over the country’s means of defense and over whatever provides or supports the national power,” Imam Khamenei underscored.