TEHRAN, February 1 - US President Donald Trump administration has reportedly suggested cutting funds for the Energy Department’s renewable energy office by nearly three-quarters, as part of his shift away from "green" energy development. 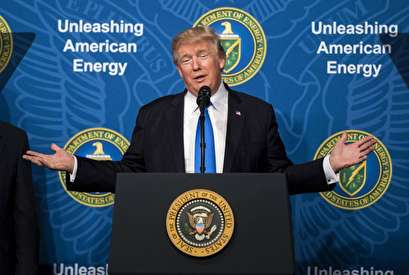 TEHRAN, Young Journalists Club (YJC) - The cuts to the Office of Energy Efficiency and Renewable Energy (EERE), which helps to transition the US to a clean energy economy, are reportedly even deeper than the two-thirds budget reduction Donald Trump proposed last year.

“It shows that we’ve made no inroads in terms of convincing the administration of our value, and if anything, our value based on these numbers has dropped,” one EERE employee told the Washington Post, speaking on condition of anonymity.

A draft of his proposed budget for fiscal year 2019 shows the administration wants to lower the office’s budget from $2.04bn this year to $575.5m in 2019, according to the Post.

It is unclear whether the documents viewed by the Post were preliminary drafts of his budget, or completed versions. The White House told the Post that it would not comment on any pre-decisional documents prior to the release of the official budget.

The Energy Department did not respond to a request for comment.

Congress has the final say in budget appropriations, and it is unlikely legislators will implement the full, 72-percent cut suggested by Trump. He recommended reducing the EERE budget to $636.1m in 2018, but Congress did not implement the change.

Trump has made his preference for natural gas and “clean coal” known, boasting in his recent State of the Union address that he had “ended the war on clean coal” and made America “an exporter of energy to the world”. (The Energy Information Administration deemed the US a net exporter of energy shortly before Trump took office.)

Last week, He implemented a tariff of up to 30 per cent on solar panels made abroad, angering green-energy advocates. In March of last year, he signed an executive order scrapping the Obama administration's Clean Power Plan and ordering the reduction of environmental regulations on the energy industry.

At a coal conference in West Virginia on Wednesday, a Trump administration adviser told industry insiders he was “here to help”.

“I went to Washington, DC, for one purpose and that was to help create coal jobs in the United States. That's my total purpose for being there,” said Doug Matheney, the special adviser in the Department of Energy's Office of Fossil Energy, according to Axios.
He added: “I'm not a researcher, I'm not a scientist, I'm an advocate for the coal industry."