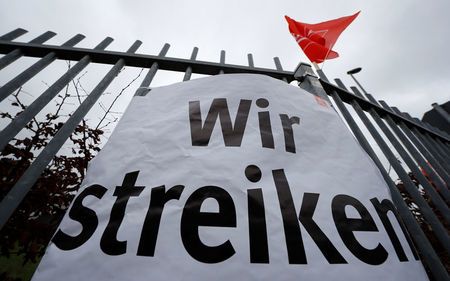 TEHRAN, Young Journalists Club (YJC) - The IG Metall union has called for full-day walkouts through Friday, firing a last warning shot before it ballots for extended industrial action that could be crippling to companies reliant on a supply chain of car parts and other components.

Both the union and employers said on Thursday that they were open to talks resuming on Monday. But each is demanding more willingness from the other to make concessions.

"What we don't want is companies in stasis for a long time and streets being full of red flags," Rainer Dulger, president of employers' association Gesamtmetall, told German business daily Handelsblatt, referring to the color of IG Metall's logo.

"I therefore hope that we are able to return to talks again as soon as possible," he said, adding that some of the demands made by Germany's largest union went too far.

"There can only be an agreement if the employers improve their stance on all three topics: pay, the right to shorter hours and aid for workers burdened by their situation at home or at work," said IG Metall chief Joerg Hofmann.

The union has also asked for workers to be given the right to reduce their weekly hours to 28 from 35 to care for children, elderly or sick relatives, and to be able to return to full-time work after two years.

This is IG Metall's first major push for a change in hours since workers staged seven weeks of strikes in 1984 to help to secure a cut of the working week to 35 from 40 hours.

Employers have offered a 6.8 percent wage increase but rejected the demand for shorter hours unless they can also increase workers' hours when necessary.

They have also dismissed the idea that they should make up some of the pay shortfall for workers who cut their hours, saying that would mean some being paid a higher hourly wage than others.

By Friday the number is expected to rise to about 260 companies, including Mercedes-Benz maker Daimler and VW's Porsche.

The DIW economic institute has estimated that the strikes could cost companies a total of 62 million euros ($77 million) a day in lost revenue, assuming about 50,000 workers stop working for one day each.

The employers are challenging the strikes in court and seeking damages.

Workers at Volkswagen's headquarters in Wolfsburg and at other sites in western Germany were staging separate strikes on Thursday after IG Metall rejected an improved pay offer for about 120,000 staff.