TEHRAN, February 2 - Some of the poorest people in the city spend their days in the shadow of Los Angeles City Hall, napping on flattened cardboard boxes. 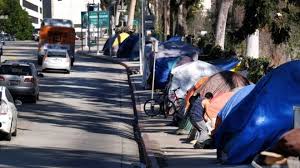 TEHRAN, Young Journalists Club (YJC) - On any given day, as many as 20 people take to the City Hall lawn, across the street from LAPD headquarters. They're there to "escape the madness" in downtown streets, a 53-year-old homeless man named Lazarus said last week. At night, they fan out to doorways or deserted plazas to wait for daybreak.

The growth of a homeless day camp at the halls of civic power speaks to the breadth of Los Angeles' burgeoning homelessness problem.

The number of those living in the streets and shelters of the city of L.A. and most of the county surged 75% — to roughly 55,000 from about 32,000 — in the last six years. (Including Glendale, Pasadena and Long Beach, which conduct their own homeless counts, the total is nearly 58,000.)

Three out of four homeless people — 41,000 — live in cars, campers, tents and lean-tos, by far the biggest single group of unsheltered people in any U.S. city. If you took out Los Angeles, national homelessness would have dropped last year for the first time since the recession.

People left behind by the economic recovery can't compete with young professionals who have bid rents up to record levels.

In another era, they might have found refuge in crumbling hotels and tenements. But many of those buildings were lost in the city's post-recession spree of building, evictions and renovations.

The problem has only gotten worse since Mayor Eric Garcetti took office in 2013 and a liberal Democratic supermajority emerged in 2016 on the county Board of Supervisors.

Tent cities stretch from the Antelope Valley desert to the Santa Monica coast, with stopovers in unlikely communities — even Bel-Air, where a homeless cooking fire was implicated in December's Skirball fire.

During an October hygiene survey, county public health officials identified 222 encampments, including 50 with 30 or more people living in them. These ragtag outposts have altered the basic terms of urban life.

People in Koreatown step outside their fancy condos to find tents, rotting food and human feces at their doorsteps. Buses and trains have become de facto shelters, and thousands of people sleep in fear and degradation.

Officials and philanthropic groups have been housing more homeless people than ever before — 26,000 between 2014 and 2017. But L.A. has a severe housing shortage, and city and county homeless programs have been slow to start and too limited to absorb the waves of people forced into the streets.

Officials are hoping reinforcements will breathe new life into the effort to end homelessness. Over the last 16 months, voters have agreed to tax themselves $4.6 billion to build housing — 10,000 units in 10 years — and provide supportive services for homeless people. A long-delayed developer fee that's expected to pump out $100 million annually for affordable housing was finally adopted, although some observers wonder whether it comes too late to capitalize on the building boom.

The county money started flowing in October; officials have quadrupled homeless outreach teams, added 600 shelter beds, expanded winter shelter hours and ramped up hotel vouchers. Some 1,000 new employees are being hired at every level of homeless services, including support for people in the new housing projects.

"The reason I'm optimistic … are the unprecedented resources," said Garcetti, who has been criticized for moving too slowly. "You've got to make sure you're not just pushing the problem from place to place."

"To project nearly $5 billion in revenue over the next decade shows substantial resolve and an undeniable commitment," said Los Angeles County Supervisor Mark Ridley-Thomas. "The people of this region and their leaders [have] relocated their moral compass."

But the crisis has been decades in the making. If homelessness continues to escalate at current rates, it will swamp even the best efforts.

"We are moving more homeless families and adults into housing," said Phil Ansell, director of the Los Angeles County Homeless Initiative. "What we have less control over is the inflow: people who simply are unable to pay the rent."

Homelessness policy in L.A. has been marked by fits and starts, often centered on skid row and downtown, although Hollywood, Venice and the San Fernando Valley have long had their own problems.

The issue first emerged as a crisis in the 1980s, when encampments began to appear under downtown freeway overpasses.

But City Council members balked at putting the trailers in their districts, and abysmal living conditions caused the camps to be shut down.

Skid row sanitation has had a similar boomerang trajectory: In 1992, an activist put out portable toilets in skid row. Bradley had them hauled away.

Bradley's successor, Mayor Richard Riordan, had two dozen portable toilets installed on skid row. Half were briefly yanked out in 1998, then returned after a protest. In 2006, after they were photographed being used for prostitution, the city had them all carted off for good.

Some advocates trace L.A.'s failed policies to the city's 1975 "containment" policy on skid row, long the haven of last resort for alcoholics, the unemployable and disabled people.

Faced with widespread displacement of poor people during the redevelopment of Bunker Hill's Victorian boarding houses, the city rejected slum clearance of skid row. Instead, officials concentrated very-low-income housing and homeless services in the the 50-block district.

But it became a dumping ground for hospitals, prisons and other cities to get rid of people with nowhere else to go.

Homeless people on skid row were expected to enter shelters, graduate to transitional housing and finally earn permanent housing through good behavior, including sobriety. But many people fell off that path and never returned.

It is a contained environment," said Daniel Flaming of the Economic Roundtable, who has studied homelessness. "Exits from homelessness are scarce."

When homelessness flared again with the crack epidemic in the 1990s, the city and county sued each other over who was at fault. The county had slashed welfare payments, while the city's land-use policies had reduced the availability of low-income housing.

The lawsuits were settled by forming the Los Angeles Homeless Services Authority, which theoretically split responsibility evenly between the city and county. Critics said it allowed both to evade accountability.

In the late 1990s and 2000s, downtown Los Angeles began its spectacular turnaround from a dark wasteland to a vibrant residential and entertainment hub. Pressure grew for the city to clean up skid row.

Police Chief William J. Bratton in 2006 unleashed his "broken windows" campaign, issuing thousands of tickets to homeless people for minor offenses like jaywalking and throwing out cigarette butts. The streets cleared, but homeless people were arrested for unpaid tickets and bounced from jail back to skid row.

The county adopted a $100-million homelessness plan to build five regional homeless shelters, but a year later shelved it in the face of protests.

In 2006, the city settled litigation by signing the Jones agreement, which allowed homeless people to sleep overnight on sidewalks. The agreement set the stage for today's encampment explosion.

"We are dealing with historical consequences of bad decisions made 10 years ago to guarantee a right to sidewalks instead of a right to shelter," said Westside Councilman Mike Bonin.

But qualifying for housing takes months, and Los Angeles has a severe shortage of apartment units for poor people; 500 homeless veterans have vouchers but no place to cash them in, authorities said.

Now, the city is turning again to stopgap measures while streamlining approvals to speed up construction of permanent housing. Plans are underway for shelter expansions, motel conversions, trailer camps, mobile showers and bathrooms, and parking lots for homeless people to sleep in their cars.

"The city and county need to focus on restrooms and showers to get immediate relief," said Councilman Marqueece Harris-Dawson, chairman of the homelessness and poverty committee.

Last month, Garcetti opened temporary bathrooms on skid row. He said he would house dozens of homeless people — now camped near a freeway overpass — in trailers on a downtown city lot.