TEHRAN, February 3 - The US is more likely to use nuclear weapons, according to the new Nuclear Posture Review (NPR) just released by the administration of President Donald Trump. 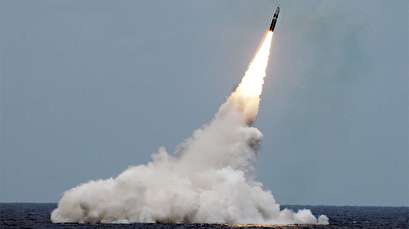 TEHRAN, Young Journalists Club (YJC) -The US is more likely to use nuclear weapons, according to the new Nuclear Posture Review (NPR) just released by the administration of President Donald Trump.

Washington’s new Nuclear Posture Review (NPR) recommends a hawkish approach to cooperation with Russia over nuclear proliferation, and further calls for the US to tackle “an unprecedented range and mix of threats” posed by foreign powers including Russia, China, North Korea and Iran.

A key shift from existing nuclear weapons policy is the expansion of scenarios in which a nuclear threats would be considered. The document lists non-nuclear attacks that could constitute grounds for US nuclear retaliation. Under the new NPR, a conventional attack which results in mass casualties or targets key infrastructure could trigger a nuclear response.

The review suggests a hawkish approach to cooperation with Russia over nuclear proliferation.  It warns that Russia is “developing and deploying new nuclear warheads and launchers” and will “continue to increase its warhead delivery capacity” in the future.

Washington finds “troubling” Russia’s adoption of military strategies and capabilities that rely on nuclear escalation, according to the NPR.

"Russia has demonstrated its willingness to use force to alter the map of Europe and impose its will on its neighbors, backed by implicit and explicit nuclear first-use threats," the report says.

"We do not want to regard Russia as an adversary," said Acting Assistant Secretary of State for Arms Control, Verification and Compliance, Anita E. Friedt said at the NPR roll-out at the Pentagon on Friday. “This not a Russia-centric NPR."

The review also calls for more integration between nuclear and non-nuclear forces, and upgrading F-35 fighter aircraft to carry nuclear bombs and missiles.

“The strategy develops capabilities aimed at making use of nuclear weapons less likely,” the White House said on a statement on Friday. “It enhances deterrence of strategic attacks against our Nation, and our allies and partners, that may not come in the form of nuclear weapons.”

Many experts have greeted the NPR with skepticism, however. Adam Mount, senior fellow at the Federation of American Scientists, accused the review of reflecting a “slanted view” of the world and an “obsolete theory of deterrence and war fighting.”

“Rather than working to reduce nuclear dangers, the nation’s nuclear policy now reflects the reasoning of US adversaries and readily follows them into a more dangerous world,” Mount wrote in Foreign Affairs magazine on Friday.

Share to
Related News
Turkey warns US it will look elsewhere if Washington fails to deliver F-35 fighter jets
Pleasing the Pentagon & building the wall: What’s in Trump’s 2019 budget?
Pence raises prospect of talks with North Korea amid 'intensified' pressure
Top US General Dunford says war with North Korea will be 'nasty'
Pentagon unveils nuclear arms policy with focus on Russia
Trump: US must modernize & rebuild its nuclear arsenal to deter any aggression
Trump wants more nukes than US can handle – outgoing nuclear warhead chief
Trump’s craving for more nukes a ‘rip off’ that only benefits military industrial complex
Tags
ready to use nukes ، conventional attack ، according to the new Nuclear Posture Review
Your Comment