TEHRAN, February 5 - For a city that produced one of Hollywood’s ultimate underdog stories, the Philadelphia Eagles delivered an equally inspiring script by upsetting the New England Patriots on Sunday for their first Super Bowl title. 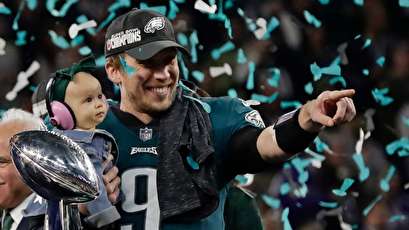 TEHRAN, Young Journalists Club (YJC) - For a city that produced one of Hollywood’s ultimate underdog stories, the Philadelphia Eagles delivered an equally inspiring script by upsetting the New England Patriots on Sunday for their first Super Bowl title.

The Eagles were underdogs throughout the NFL playoffs, and just as most expected little from fictional Philadelphia boxer Rocky Balboa, few onlookers outside the City of Brotherly Love expected them to beat the defending Super Bowl champions.

But Philadelphia, who embraced their underdog status with some players wearing dog masks throughout the playoffs, stunned New England with a 41-33 victory to cap a remarkable turnaround after finishing last in their division a year ago.

“We’ve been doubted since Day One,” said Eagles tight end Zach Ertz, who caught what proved to be the game-winning touchdown. “This team, no one picked us. We come out here and we’re World Champions.”

The victory set off a wild celebration among the team’s many green-clad supporters who made the trek to chilly Minneapolis while uplifting music from “Rocky” blared through the speakers above a field covered in silver and green confetti.

The Eagles limped into the NFL’s postseason with an offense handicapped by a seemingly hopeless backup quarterback following an injury to Carson Wentz in December but Nick Foles proved more than ready to shine on the game’s brightest stage.

Foles, who nearly retired after an unfulfilling 2015 season with the St. Louis Rams, showed no nerves playing in his first Super Bowl and went toe-to-toe with Patriots counterpart Tom Brady, a five-time Super Bowl champion.

“I felt calm,” said Foles, who was named the game’s Most Valuable Player after throwing three touchdowns. “We felt confident coming in and we just went out there and played football.”

The Eagles, who won three championships in the pre-Super Bowl era, had long been a tormented franchise and lost in their only two previous Super Bowl appearances, including to the Patriots in 2005, but dug deep to deliver a championship to fans in their unwavering city.

Trailing by a point late in the fourth quarter, the Eagles moved ahead for good when Foles connected with Ertz on a 11-yard touchdown that held up after a review determined the catch was good to put his team ahead 38-33.

Philadelphia missed a subsequent two-point conversion attempt to leave the door open for the Patriots with a little less than two-and-a-half minutes to play.

But in a game when both offenses moved up and down the field effortlessly and combined for a Super Bowl record 1,151 yards, Brady had the ball swatted from his grasp and it was recovered by Philadelphia to all but seal the Patriots’ fate.

The Eagles went on to kick a field goal to extend their lead to eight points and denied the Patriots from engineering a last-minute, game-tying drive.