TEHRAN, February 5 - Thousands of protesters rallied in Athens on Sunday to demand a hard line in the nation’s dispute with the Republic of Macedonia over the name it shares with a northern Greek region. 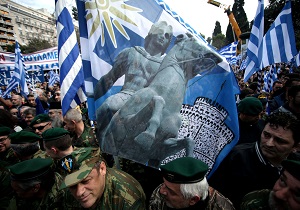 TEHRAN, Young Journalists Club (YJC) - For the past three decades, Greece has opposed the Skopje government’s attempts to join the North Atlantic Treaty Organization and start accession talks with the European Union, claiming the use of the name Macedonia masks its aspiration to reclaim adjacent territory in Greece. After a new round of negotiations in December, a compromise brokered by the United Nations, which would include the use of an adjective before the name Macedonia, appears within reach.

Complicating things, Tsipras relies on the support of the nationalist Independent Greeks party for his majority in parliament, which has said it won’t back any variation of the term Macedonia for the neighboring country.

“Protests will definitely create problems to the negotiations,” said Nikos Mouzelis, professor emeritus of sociology at the London School of Economics. That said, “Tsipras has to move forward with his plan,” Mouzelis added, as Independent Greeks have said they “will support the government until the end of its term.”

With surveys showing that the vast majority of Greeks wouldn’t approve any compromise on the word “Macedonia,” Sunday’s protest -- the second in two weeks -- adds to Tsipras’s woes, after his capitulation to the policy demands of international creditors sent his approval ratings slumping. “Obviously government didn’t expect that kind of reaction from both people and opposition parties,” Lefteris Kousoulis, a political scientist, said.

While the main opposition New Democracy party has accepted that use of the name Macedonia is unavoidable, it has refused to back Tsipras in this round of talks, claiming he hasn’t secured sufficient guarantees against any claims on Greek territory from Macedonia.

The dispute strikes a sensitive chord in local identity politics, as most Greeks take offense at claims to the cultural heritage of the ancient Macedonian kingdoms. Tsipras, like most Greek leaders before him, is facing increasing pressure from allies including the U.S. to clear the path for the Macedonian Republic to join NATO.

Greek Foreign Minister Nikos Kotzias said after a meeting with the UN’s Special Representative Matthew Nimetz in Athens last week that the government is preparing to send a draft deal to Macedonia’s government, which won’t be a “take it or leave it” offer. The deal would force Macedonia to change its constitution in order to make clear that there are no territorial claims against Greece and its northern region of Macedonia, which abuts the former Yugoslav republic.

Riding the wave of discontent, New Democracy party, which is leading in polls, is unlikely to offer Tsipras any support for a compromise. If the solution comes to Parliament and Independent Greeks decline to vote, then “the government may not have any other choice than to go to elections,” Kousoulis said. The premier may count on the support of smaller center-left parties, which would be enough to bail him out, even after a potential mutiny by nationalist allies.

The Greek veto of Macedonia’s joining NATO is getting weaker, Mouzelis said. “The U.S. and the EU want the name dispute to be solved immediately for geopolitical reasons due to Russian presence in the Balkans,” he said.