TEHRAN, February 6 - An eight-storey office building on Valiasr St. downtown Tehran is still ablaze and there is a possibility for the collapse of a part or the whole structure, Tehran mayor said Tuesday. 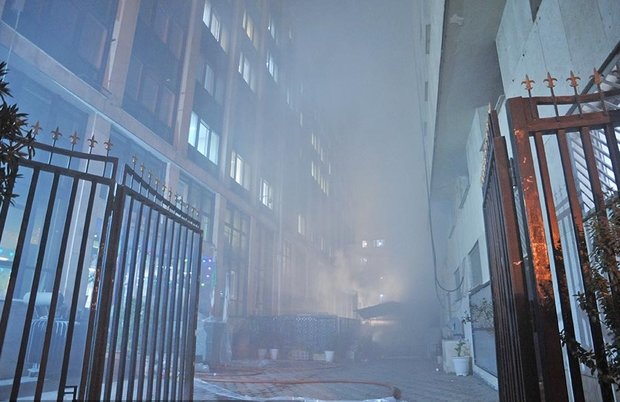 TEHRAN, Young Journalists Club (YJC) - Mohammad Ali Najafi, Mayor of Tehran, made the observation during his visit to the eight-storey office building on Valiasr St., adding “the building has been on fire since 10 am Monday, and according to reports by firefighters, the location of the fire is the archives in the minus fourth floor, which contains a great bulk of documents and paper, and is very difficult to reach.”

Over 50 people trapped beneath the ground floor were rescued in the early minutes of the fire, and two sustained minor injuries.

He went on to add, “the fire has not been controlled 100 percent, and it seems like the western side of the building has subsided. Cracks have also appeared on the entrance to the parking lot, which raises the possibility of the total subsiding of the building.”

Najafi maintained that the neighboring buildings in the southern, eastern and western sides of the scene of fire have been evacuated, and the residents transferred to hotels and other safe locations.