TEHRAN, February 6 - Angela Merkel calls on Social Democrats to show readiness to compromise ahead of final round of negotiations. 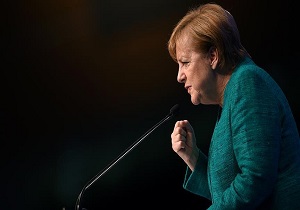 Talking to reporters ahead of final round of coalition negotiations on Tuesday, Merkel said her conservative bloc CDU/CSU and Social Democratic Party had not yet reached an agreement on a number of key topics, including healthcare and labour law.

“Each of us still have to make painful compromises,” Merkel said.

“I am also ready for that, once we can ensure that at the end the advantages would outweigh the disadvantages,” she added.

Merkel said Germany’s “international reliability” was among the divisive topics discussed with the Social Democrats, but she did not elaborate.

The center-left Social Democratic Party (SPD) had long been critical of plans to increase the country’s defense budget, and disputed NATO’s goal that each member should spend 2 percent of its national output on defense.

Germany spent 135 days without an elected government following parliamentary election on Sept. 24, 2017, the longest period since the Second World War.

The CDU/CSU bloc and SPD reached a tentative coalition deal on Jan. 12, following several weeks of preliminary discussions, while the SPD’s congress on Jan. 21 backed entering coalition negotiations with the conservatives.

The SPD leaders have promised that any coalition agreement with Merkel’s CDU/CSU bloc would eventually be voted by around 450,000 members of the center-left party.

The SPD’s traditional left-wing and the youth organization, Jusos, are opposing the move to enter into a coalition government with the Christian Democrats.