TEHRAN, February 6 - A UK judge has ruled against dropping Julian Assange’s arrest warrant, declining to set him free from the Ecuadorian embassy where he's been holed up since 2012, according to reports initially challenged by Assange. 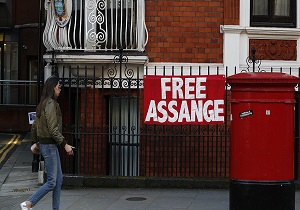 TEHRAN, Young Journalists Club (YJC) - Assange, 46, absconded in 2012 to enter the Ecuadorian embassy, to avoid extradition to Sweden over allegations of sexual assault and rape. However, Swedish prosecutors have since dropped those charges.

Still, Assange has been unable to leave the embassy in London, as he faced arrest for breaching his bail conditions in the UK.

Assange's lawyer, Mark Summers, argued that the arrest warrant should be dropped because it had “lost its purpose and its function,” citing the dropped charges against Assange in Sweden.

“[Assange] has spent five-and-a-half years in conditions which, on any view, are akin to imprisonment, without access to adequate medical care or sunlight, in circumstances where his physical and psychological health have deteriorated and are in serious peril,” Summers wrote in court papers, as quoted by the Guardian.

However, Aaron Watkins, who represents the Crown Prosecution Service (CPS), called Summers’ argument “strange and untenable,”adding that it was an attempt at “contorting legislation” to allow Assange to leave the embassy.

“Assange had been released on bail in proceedings; he was under a duty to surrender to the custody of the court and he failed to surrender at the appointed time for him to do so. Therefore the warrant stands,” Watkins said, calling Assange’s situation “extremely simple.”

Assange was made an Ecuadorian citizen in December. However, the UK refused to recognize him as having diplomatic status, which would have given him legal immunity and allowed him to leave the embassy.

Even if Assange's arrest warrant has been dropped, he could have still been extradited to the US to face trial over WikiLeaks' publication of classified US military and diplomatic documents in 2010 – which amounted to one of the largest information leaks in United States history.

If found guilty in a US court, Assange could face life imprisonment – or possibly even the death penalty – under the Espionage Act. British authorities have declined to confirm or deny if a US extradition warrant has been received.

The Wikileaks founder has consistently denied the allegations of rape and sexual assault.