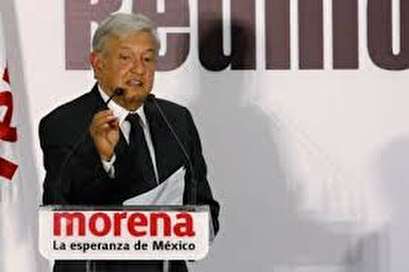 Lopez Obrador holds 34 percent of the vote, eleven percentage points more than Ricardo Anaya of the left-right coalition “For Mexico in Front” on 23 percent, according to the survey by polling firm Parametria, published by Reuters on Wednesday ahead of wider publication.

The survey, carried out and financed by Parametria, was taken between Jan 25 and Feb 2. Of the 1,000 people interviewed in their homes, 14 percent either did not answer, responded that they did not know or could not choose a candidate listed.

The results are broadly in line with a separate opinion poll published on Tuesday by newspaper El Financiero, which gave leftist Lopez Obrador an 11 point lead, with Anaya, the former chairman of the conservative National Action Party, gaining ground fast and Meade gaining slightly.

The July 1 election could be the first time that independent candidates make it onto the ballot, changing the dynamics of the campaign, said Parametria founder Francisco Abundis.

Three hopefuls are likely to collect enough signatures to go on the ballot, regulator INE data showed, and their mere presence takes votes from Anaya and Lopez Obrador.

Between them, independents hold 11 percent of the vote, but they could also influence the election in other ways, for example by deciding to throw their votes behind another candidate in the end.

“To explain this election, we have to observe these three actors, its fundamental,” Abundis said. “It’s not that they’ll give 12 points to one candidate, but suppose its half that, this is a much closer election.”

Margarita Zavala, wife of former President Felipe Calderon, holds 7 percent of the vote, while the on-leave governor of the state of Nuevo Leon Jaime Rodriguez Calderon has just 2 percent.