TEHRAN, February 7 - Donald Trump and Emmanuel Macron have agreed a date for the French president’s state visit to the US, it has been announced. 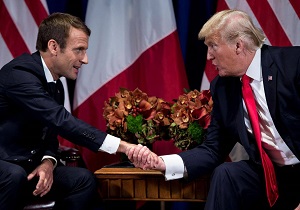 TEHRAN, Young Journalists Club (YJC) - Mr Macron is expected to visit Mr Trump in late April, according to Agence France-Presse – making him the first world leader to break ranks and visit Mr Trump in such an official manner since the US president’s inauguration over a year ago.

Theresa May invited Mr Trump to visit the UK in the hope of building close trade relations with the far-right president’s administration, but the trip has apparently been repeatedly delayed amid the threat of protests.

Despite Ms May’s overtures to the US president, she was snubbed earlier this year when the White House announced that Mr Macron would be the first official visitor.

Ms May confirmed the visit was still going ahead in an interview last month, despite reports that it had been cancelled because of possible bad publicity.

She said she believed he was “somebody who is taking decisions on what he believes is in the best interests on the US”.

Mr Macron has been more publicly critical of Mr Trump’s policies and comments than Ms May. The French president criticised the US president for allegedly calling African countries “sh***ole” countries, saying it was “not a word you can use”, and urging “respect”.

“I am always extremely direct and frank,” he said in an interview with the BBC in which he discussed the issue.

Mr Trump visited France on Bastille Day last year where he watched a military parade. Describing the spectacle as “one of the greatest parades I’ve ever seen” Mr Trump has since ordered the Pentagon to hold a similar military march through Washington DC.

“He has asked the Department of Defense to explore a celebration at which all Americans can show their appreciation,” his spokesperson told reporters in Washington DC.