North Korea has 'no intention' to meet US in South

TEHRAN, February 8 - North Korea has no intention to meet US officials during the Pyeongchang Winter Olympics in the South, Pyongyang's state media said Thursday. 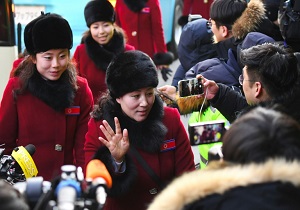 TEHRAN, Young Journalists Club (YJC) - North Korea has no intention to meet US officials during the Pyeongchang Winter Olympics in the South, Pyongyang's state media said Thursday, ahead of a widely expected military parade that would overshadow the Games' opening ceremony.

The nuclear-armed North is on an Olympics-linked publicity drive -- sending a troupe of performers, hundreds of female cheerleaders, and the sister of leader Kim Jong Un to the South.

But at the same time thousands of troops and hundreds of armored vehicles have been seen rehearsing for what would be a show of strength in the center of the capital.

Analysts say that with the dual approach, the North is looking to normalize its status as a "de facto nuclear state", and could be trying to weaken the sanctions regime against it or drive a wedge between the South and its ally the US.

"We have no intention whatsoever to meet US authorities during our visit to the South," Cho Yong Sam, a senior foreign ministry official, was quoted as saying by the North's official KCNA news agency.

"We have never begged for dialogue with the US and will never do so," he said.

But his comments did not rule out a meeting -- and nor has US Vice President Mike Pence, who is due in the South on Thursday.

North Korea is under multiple sets of UN Security Council sanctions over its banned nuclear weapons and ballistic missile programmes, which have seen it develop rockets capable of reaching the US mainland.

Both Kim Yong Nam, the North's ceremonial head of state, who is leading its delegation, and Pence are due to attend the opening ceremony in Pyeongchang on Friday.

That could put them in the same room at a leaders' reception beforehand.

Pence has lambasted the North, announcing in Tokyo on Wednesday that the US would impose its toughest sanctions to date on the regime.

The US "will not allow North Korean propaganda to hijack the message and imagery of the Olympic Games".

But on his way to Asia, he left open the possibility of meeting any of Pyongyang's representatives.

"I have not requested a meeting, but we'll see what happens," he said.