TEHRAN, February 8 - The head of the World Bank compared cryptocurrencies to “Ponzi schemes,” the latest financial voice to raise questions about the legitimacy of digital currencies such as Bitcoin. 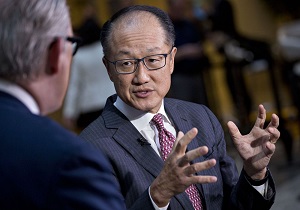 TEHRAN, Young Journalists Club (YJC) - The head of the World Bank compared cryptocurrencies to “Ponzi schemes,” the latest financial voice to raise questions about the legitimacy of digital currencies such as Bitcoin.

“In terms of using Bitcoin or some of the cryptocurrencies, we are also looking at it, but I’m told the vast majority of cryptocurrencies are basically Ponzi schemes,” World Bank Group President Jim Yong Kim said Wednesday at an event in Washington. “It’s still not really clear how it’s going to work.”

The development lender is “looking really carefully” at blockchain technology, a platform that uses so-called distributed ledgers to allow digital assets to be traded securely. There’s hope the technology could be used in developing countries to “follow the money more effectively” and reduce corruption, Kim said.

The value of cryptocurrencies soared in 2017 before slumping, with Bitcoin losing nearly two-thirds of its value since mid-December.

While cryptocurrency technology has the potential to reshape global finance, concerns have been raised about its volatility and the potential for money laundering or other crimes.

In a speech this week, Bank of International Settlements chief Agustin Carstens said there’s a “strong case” for authorities to rein in digital currencies because their links to the established financial system could cause disruptions. Federal Reserve Chair Jerome Powell has said that “governance and risk management will be critical” for cryptocurrencies.

Share to
Related News
How Blockchain can 'revolutionise' the world
Cryptocurrencies pose serious threat to Bank of America according to its SEC filings
Bitcoin sinking like a stone with cryptocurrency market in freefall
It's getting harder to buy bitcoin with a credit card
Bitcoin rate falls below $8 thousand
India cracking down on ‘illegal’ cryptocurrencies
Half the world will be using cryptocurrencies in 5 years
Philippines to develop rules on cryptocurrency trading
Japan punishes Coincheck after $530 million cryptocurrency theft
Bitcoin could hit $50,000 this year & such volatility is normal, expert tells RT
‘I don’t want that in my life’: Apple’s Steve Wozniak reveals reason he sold his bitcoin
Hacked Tokyo cryptocurrency exchange to repay owners $425 million
Tags
world bank ، cryptocurrency ، global bank
Your Comment