TEHRAN, February 8 - North Korea has held a military parade and rally on Kim Il Sung Square a day before South Korea holds the opening ceremony for the Pyeongchang Winter Olympics. 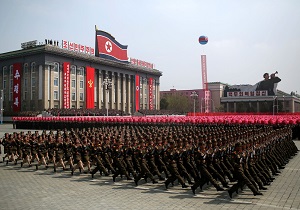 TEHRAN, Young Journalists Club (YJC) - More than 10,000 troops had trained for the parade in advance. Residents practiced in plazas around the North Korean capital with bouquets of plastic flowers to be used to spell out slogans during the parade.

A South Korean government official said tens of thousands of people participated or watched the parade Thursday morning in Pyongyang.

The official says it wasn’t immediately clear whether North Korea displayed strategic weapons such as intercontinental ballistic missiles during the parade. The official didn’t want to be named, citing office rules.

The North had said the parade would mark the 70th anniversary of its military founding.